I think it’s crystal clear at this point that the world is a divided place: between those who know Terror are awesome and those who haven’t quite worked it out yet. The West Coast wrecking machine is so unstoppable that even global pandemics cannot halt it. Last year saw the release of the Sink to Hell EP, the Between the Lines/ A Minute to Pray 7” and Scott Vogel’s resurrected Buried Alive project putting out their own EP, in Death Will Find You.

So, as the year changes, but little else does, what else is Terror expected to do but drag in former guitarist Todd Jones before he produces the new album and have a trip down memory lane.

Gathering at drummer, Nick Jett’s studio the band’s new release, Trapped in a World, is a revisiting of the highlights of Terror’s first two recording on which Jones played before departing for Nails. This new version features five tracks from 2003’s Lowest of the Low and seven from the following year’s first album proper, One with the Underdogs. 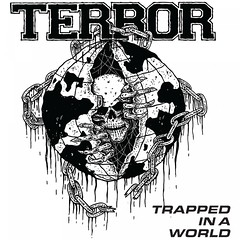 Rather than being a rerecording of those early tracks, what Trapped in a World is best regarded as the band giving the listener an earshot of what happens when Terror get together in the studio. The record is a whole band recording, warts and all, and will be the closest we’re likely to get to genuinely hearing Terror playing live until they are able to tour again.

As this is a as-they-were recording it feels more relevant and there is a sense of eavesdropping on a private moment. There are no over-dubs here, so when Scott’s voice doesn’t maintain that aggressive growl, it’s there to be heard because that is how Terror sounded on that day.

The live feeling is further enhanced as the songs run into each other. Lowest of the Low merges directly into Life and Death with hardly a missed beat; Crushed by the Truth’s aggressive onslaught runs into the more groove-heavy Not This Time as if they have always sat that way, as opposed to the reverse.

The track selection is damned-near perfect and gives Terror the opportunity to flex those musical muscles. Rather than focusing purely on the aggro-heavy songs, Trapped in a World throws together the gamut of the early days. From Better Off Without You to the impossibly catchy Push It Away, there’s something for all the family on offer here. Just spending a few moments with Overcome and Out of My Face speaks volumes about the influence Terror have had on the likes of Hatebreed.

Keep Your Mouth Shut might not be Terror’s most ferocious musical moment but within that track beats the heart of a lion and, in many ways, encapsulates everything that is great about this band. For me, however, the highlight of this session is the version of One With the Underdogs. Both angry and melodic it is their unofficial anthem and acts as a reminder that things will get better.

Trapped in a World is not meant as a replacement for either Lowest of the Low or One With the Underdogs, rather a moment in time when a creative force was pulled back together. The unpolished nature of the recording piqued the imagination and conjured images a scores of smashed and sweat-soaked bodies locked in pit-combat. Oh for those days again.

This is the prima facie evidence needed to convince the non-believers that Terror is indeed an awesome band. Dan loves Terror – be like Dan!