Five Finger Death Punch have announced their biggest European arena headlining tour to date, which will take place in January and February of 2020 with a massive package: multi-platinum legends Megadeth will join the lineup as the special guest. Support will come from Bad Wolves, the global breakthrough rock sensation of 2018 who have been garnering three #1 hits over the last 18 months and are getting ready to release their sophomore album on October 25, 2019.

“The line-up is massive. Bad Wolves were THE break out band of recent years and are certainly bringing the heat. Megadeth needs no introduction, they are absolute legends. Dave Mustaine’s contribution to this genre is simply immeasurable. I consider him one of the founding fathers of not just Thrash but Heavy Metal in general, because his riffs and guitar playing have influenced everyone that was in Megadeth’s blast radius… and that’s a big radius.”

“Hindsight is always 20-20, but looking back it’s still a bit fuzzy. Looking forward, you’ll be in trouble if you don’t come see us with Five Finger Death Punch in early 2020. You don’t wanna miss it. See you soon!”

The tour will visit 17 European countries starting on January 20 at the Hartwell Arena in Helsinki, Finland and ending on February 20 at the Budapest Sportarenain Budapest, Hungary. VIP pre-sales for the tour are kicking off today. The general on-sale starts at 10am local timethis Friday, September 13. Fans can look forward to packed arenas at THE not-to-be-missed rock show of Winter 2020.For tickets and more info please visit: www.fivefingerdeathpunch.com.

Tickets go on sale Friday, 13th September from all your usual ticket outlets. 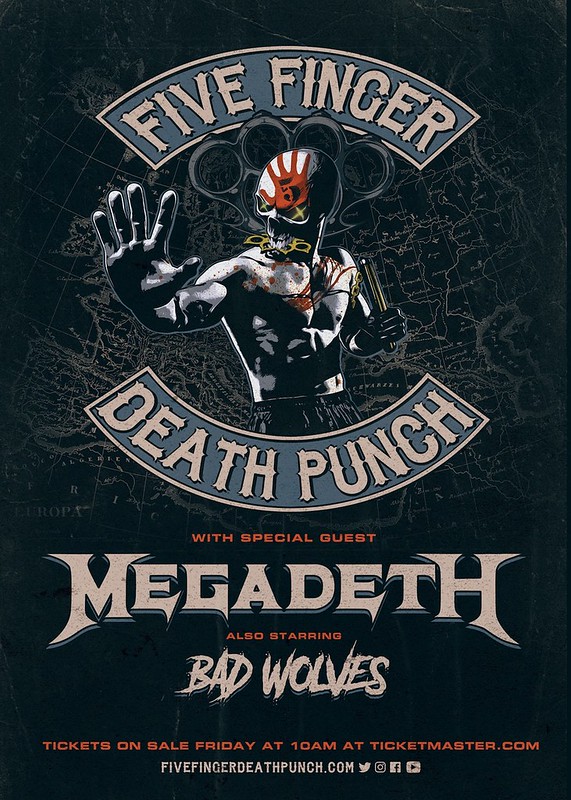