Few bands inspire or intrigue as much as Gascon duo The Inspector Cluzo. After six albums, a decade together, the organic farmers in Mont de Marson are self-sufficient, self-financing and self-managing. One of the most toured French bands, with over 1000 gigs in 65 countries, the CV is shaping up well. Add in the fact that since 2013 the duo of Malcom (Laurent Lacronts) on guitar/vocals and Phil (Mathieu Jourdain) on drums/backing vocals sustain their own geese farm at Lon Casse, one of the oldest farms in their region and then finish with the fact that they supported no-one other than Clutch on their recent forays into Europe. 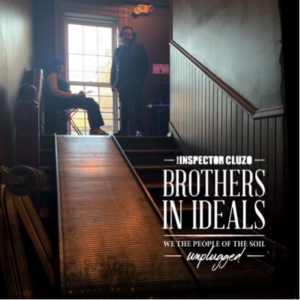 ‘Brothers in Ideals’ is an acoustically based re-imagining of their 2018 breakthrough album release, ‘We, The People Of The Soil’. Inspired by a 2016 acoustic session for Arte-Deezer, ‘Brothers in Ideals’ sees the band shake of their traditional fuzzed up hard rocking set-up of guitar and drums to provide a different take on an album that I have to admit was a joy to dust back down. “We were not planning to release it ...but it is our own label and we do what we want. We never have a career plan...we just follow our artistic desire”, commented vocalist Laurent.

If you are familiar with ‘We, The People of the Soil’, then ‘Brothers in Ideals’ should be an enjoyable reminder with a different slant. A laid-back approach, brushes slapping the drums whilst Laurent’s guitar sings acoustically. Amongst the splendid tracks here are the opening song, ‘A Man Outstanding in His Field’, ‘Ideologies’ (where Laurent emits a fabulous Johnny Cash-esque delivery, ‘The Best’ where the male-female duet simply moves the heart and ‘Brothers in Ideals’, which benefits from some subtle and delicate piano/electronic organ. Soaring violins combine magnificently on ‘The Sand Preacher’. Whilst the album isn’t the band’s usual rip-snorting style, there is plenty here to snare new fans who may be looking for something a little different as well as enough to satisfy the longer term fans who have been asking for this for some time. At times melancholic, always enchanting and engaging, this is an album that was enjoyable from start to finish.

The band will support the release of ‘Brothers in Ideals’ with a headline UK tour in February followed by extensive European festival appearances in the summer.