Oakland’s Hallucinator’s name sound like they should be a trippy band. Full of LSD and expanding the mind nonsense. What you actually get is a grindcore/early death metal sound full of brake neck speed and barely auditable vocals. It's full of anger and hatred, with some DIY punk from the early 80’s stirred in. It makes for a furious ride. 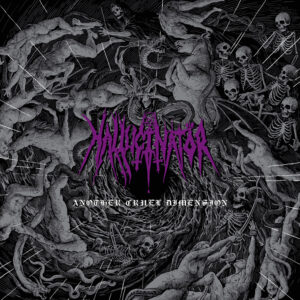 When I listened to it I conjured up visions of dread locked punks playing a squat at 3.00am and being paid with pills, weed and cider. Then I thought... maybe they were extreme left wing activists who play for free and reject all of modern society. Again, not the case, they look like Judas Priest crossed with early Celtic Frost. The production on this record? Well, on scum by Napalm Deth, the two sides sound very different. Hallucinator's Vocals and drums sound like side A of Scum, a bit echoy and absolutely chaotic, and the guitars sound like side B, a bit nastier and vicious.

As the album progresses you get used to the sound and you start to understand and feel the music more. By the time you’ve reached 'Ruthless Transgression', you’re in tune and on the same wave length as the band. Peppered throughout the album are short synthesiser based instrumentals. I have no idea where they come from and if I’m honest, don’t fit in at all (they remind me of 80s children sci-fi shows that were not meant to be scary… but were bloody scary like Chocky... who remembers that?)

Lovers of early Napalm Death, Bathory, GBH and Discharge will feel right at home with this collection. Raw and uncompromising, played with vigour, blood, sweat and tears. Hallucinator were born too late. Mid to late 80’s was the era would have suited them down to the ground. Lots of stage diving lots of intensity and a damn good time.

Hallucinator release 'Another Cruel Dimension on February 14 on Carbonized Records