I’ve got a lot of time for Buffalo Summer. As a South Walian it’s been interesting to watch their slow but steady ascent up the classic rock ladder. Their self-titled debut, way back in 2011 was a cracking listen. It took a while to get to the sophomore release but 2016’s ‘Second Sun’ was a solid follow up. Their journey continues with album number three, and it’s a tasty 12 track release which should solidify the band’s status as one of the UK’s top hard rock outfits.

What’s impressive about this album, recorded at the legendary Rockfield Studios in the Monnow Valley Studio and produced once more by Barrett Martin (Screaming Trees) is that it took just five days to put together. This gives ‘Desolation Blue’ a fabulous natural feel. Opener ‘The Power and the Greed’ (with the intro riff pinched from ‘Shine on You Crazy Diamond’) is assured and confident, the band displaying a swagger that comes from years of gigging and playing together. Andrew Hunt’s vocals are as sultry as ever, glimpses of Myles Kennedy surface without ever sounding forced, and Jonny Williams guitar echoes with a sinister edge. The underlying rhythm contains a funky beat which even brings the sound of Jamiroquai to mind for fleeting seconds. ‘Hit the Ground Running’ continues the groove, and features Kelby Ray Caldwell (The Cadillac Three) with lap steel. 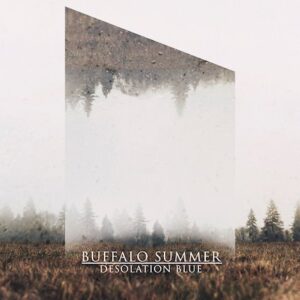 ‘If Walls Could Speak’ maintains the good vibe feeling, an energetic fist pumper which is likely to become a fan favourite. It’s clean, warm and with a hook to ensnare the listener. ‘The Mirror’ follows, a more mellow track, using a 70’s style riff to open, and vague shades of the Manic Street Preachers subtly reverberating. The addition of cello and mandolin on ‘Last To Know’ (courtesy of Emma Bryden and REM’s Peter Buck respectively) is a nice touch for a song that slows the pace and allows Hunt to stretch those fine vocal chords once more.

The band flex their blues chops on ‘Dark Valentine’, a slow, smouldering song which demonstrates the maturity in the writing, Darren King’s bass locking things down with Gareth Hunt’s patient drumming, whilst Williams melancholic guitar provides just the right edge. Martin steps from behind the desk to add some Hammond organ to good effect. Further variation on ‘Everybody’s Out For Number 1’, which has a driving, hip-swinging attitude and the typical swagger on ‘Untouchable’. Buck returns for some delicate 12 string-guitar on ‘The Bitter End’, a song that oozes Americana class before Brydon adds more haunting cello on the closing ‘Pilot Light’.

An album that should solidify the band’s status and whilst their tour to promote the album is, like everything else, on hold, ‘Desolation Blue’ will at least provide cheer in the world of new releases in such uncertain times.