This week when we arrived at Devil's Island we found Scouse horror noise outfit Video Nasties sat on the beach. Missing persons reports had been filed, we had seen no trace of them, we thought they may have fallen victim to a story line from one of the horror films they love so much, yet today we find him washed up on our island!

Dave: “Nu med" by Balkan Beat Box. Has to be my most listened to album to date. Amazing musicality, interesting time signitures and perfect for fun in the sun.
Rick: I’m gonna have to go with Deftones - Diamond Eyes. It has a little of everything on there so no matter what mood I was in I’d be a happy camper... also I stand by the saying “every day is a Deftones a day”
Tommy: Cutthroat self titled album from like 1987 I think? As it’s SO metal, everyone would be so pumped! Desperately trying to find food, and other herbal remedies.
Damian: I grabbed Beastmilk’s Climax as it’s a modern day classic, and if I’m stranded on an Island, I’m probably gonna wanna dance whilst I’m going batshit from attempting to drink salty sea water. The album distills pretty much everything I love about Goth or punk and melds the two together in an orgy of awesomeness.
Stu: Sergeant Pepper's Lonely Hearts Club Band. Got everything you'd want from an album.

Stu: Metallica's Black album. I'd imagine it'd be too bright in the shack.
Rick: Black Sabbath, Black Sabbath. Iconic album and one of my all time favourites. The cover is suitably eerie and haunting. I love it.
Damian: Poster I’d pick would be Somewhere In Time by Iron Maiden. Let’s face it, I’m gonna be bored as fuck until we all get desperate enough to have sex with each other and there’s a lot hidden in that artwork to keep me busy for at least a little bit.
Tommy: Miles Davis - Bitches Brew is a pretty far out album cover. Painted by a German guy called Mati Klarwein. His paintings were used for loads of bands artwork. Herbie Hancock, Bill Laswell, The Last Poets. All kinds. It’s almost Dali-esque that one.
Dave: Tindersticks. First album, because it is beautiful and alluring to look at. The red dress in the art has amazing detail and the lady wearing it looks like she is really enjoying the moment.

Rick: Old Fashioned. If I’m gonna be stuck on this island and possibly die out there then you better believe I’m getting drunk as fuck.
Damian: Favourite tipple is defo gin but with SLIMLINE tonic. I gotta watch them calories and my waistline. I don’t  wanna be looking any more like Ollie Reed in Castaway than I already do.
Dave: White Russian would be my tipple. The milk would keep me nourished whilst the coffee taste would be fitting each morning.
Stu: Tea. Can't live without it. If hot drinks are out, whisky Old Fashioned.
Tommy: It would have to be beer! Nothing like a refreshing soft drink, on a hot desert island day, with the lads.....forever!  Nothing new but I’m quite fond of anything Shipyard at the moment, let’s go with the IPA.

Damian: Merch, I’d be bagging a Kiss Kasket to see if I can attempt to use it as a boat. if not, then at least I’ll leave a Klassy Korpse!
Stu: Kiss 'Alive 35' survival knife, of course. Kiss have the most daft merch I've ever seen.
Rick: Fuck it, I’m here for a good time, not for a long time. Pass me that Motörhead beach ball.
Tommy: My ancient Motörhead t-shirt, it’s probably older than me! I’m sure it’s a cheap bootleg, but I’ve had it forever.
Dave: I'd keep my long sleeve Sepultura Schizophrenia T.

Stu: My dog, Beppè.
Rick: I mean I’ve been stuck in a band with them for the last 3 years, why make any changes now?!  I guess being shipwrecked with Action Bronson would be pretty cool though. That dude likes to drink and can cook so I’d be banking on him whipping up fine dishes from the land... Stoned already.
Damian: There’s no other band I’d rather be shipwrecked with, the guys are my best friends and If I’m gonna suffer, then at least its gonna be with the loveliest of lovely boys.
Dave: A gang/pack of dogs would be pretty cool and very useful.
Tommy: My son. But that’s not exactly fair on him now is it! Hahaha.

Damian: Live show has to be Live after death by Iron Maiden. So timeless, so literal, so classic and the Rime of the Ancient Mariner gives handy instructions on how to murder an albatross that I will most certainly be killing, eating and cursing myself and my merry band of men into zombie ghost pirates.
Rick: It would have to be Jeff Buckley live at Columbia Records. I fucking love Jeff Buckley and I could listen to his voice for hours on end. This set in particular everything was perfect, his band was really on form and Jeff was just electric.
Dave: Sheelana gig, Freaks Fools and Ghouls would be playing on my cassette. Banger.
Tommy: Band of Gypsys. The Hendrix live record. Apparently he didn’t like it and didn’t want it released. Contractual obligations maybe? But if that isn’t one of the best live recordings going, I don’t know what is.
Stu: Alice in Chains - Unplugged.

Dave: My message would be to Enya.
Tommy: Well, Kris Kristofferson can fly a helicopter, and he’s good mates with Willie Nelson. And as there has been absolutely no mention of drugs of any kind on this damn desert island, I think he/they should ‘attempt’ a rescue, or at the very least drop us off some hippie lettuce.
Rick: Fucking Mega Dave. He just strikes me as the type guy who owns at least one military grade tracking device.
Stu: Bruce Dickinson, he can fly a plane.
Damian: It’d be Freddy Mercury. He wouldn’t show up to a party empty handed. I’d assume in his pockets of cocaine and Amyl Nitrate he’d also have some sort of escape plan or at least the numbers of people that deal with this sort of thing.

Rick: Damian. He smokes so much weed it’d be like eating a really gamey space cake and his blood must be at least 90% booze.
Stu: Damian. Would kill him and use his canal boat-like shoes to possibly get off the island.
Damian: It’s gonna have to be Dave. I’m 99% sure he has a massive cock. So massive it will be enough to keep us all fed for decades to come.
Tommy: I’d sacrifice myself. Obviously I wouldn’t have any time to prep, pre being marooned, but if I did, I’d beef up on the filthiest of scran and most fattening of boozezzz. So there’s more of me to go around.

Rick: Geezer Butler. Geezer Butler is my bass-piration. Slickest style, best tone, he loves getting into fights with Nazis down the pub and he’s vegan too so there would be more Damian to go around while he told us all his best Black Sabbath stories around the camp fire.
Damian: In terms of biggest influence, that’d be Kevin Sharp from Brutal Truth. I’m not too sure how handy he is with building rafts or fixing a leaking Kiss Kasket that is rapidly letting in water and getting mine and Freddys cocaine stash wet though.
Tommy: I’d have to say Slash. The guy has never made a bad record as far as I’m concerned. Most people release at least one album that stands out like a saw thumb or they don’t really acknowledge or play anything from it live anymore.  He seems cool, down to earth, mellow, funny. All that goes a long way. Some words of wisdom in his biography.  And if we’re on a desert island together forever... only down to his despair of being stranded for all eternity, not for my own selfish personal reasons... hopefully he’ll fall off the wagon immediately! And we can all head down to the bar for a million beers! And get looking for the wild growing coca plants first thing the following morning. Well, afternoon.
Stu: George Harrison.
Dave: Igor Caverlera. I don’t know about shaping my way of thinking or changing my outlook on life, but he certainly knows how to smack the drums and was a major influence on me musically.

Sadly there was no room on our boat so we had to leave the lads behind on the island. Will they get back before eating each other? That's anyones guess. Whether they do or not, their new album 'Dominion' is out on APF Records on Friday 13th! 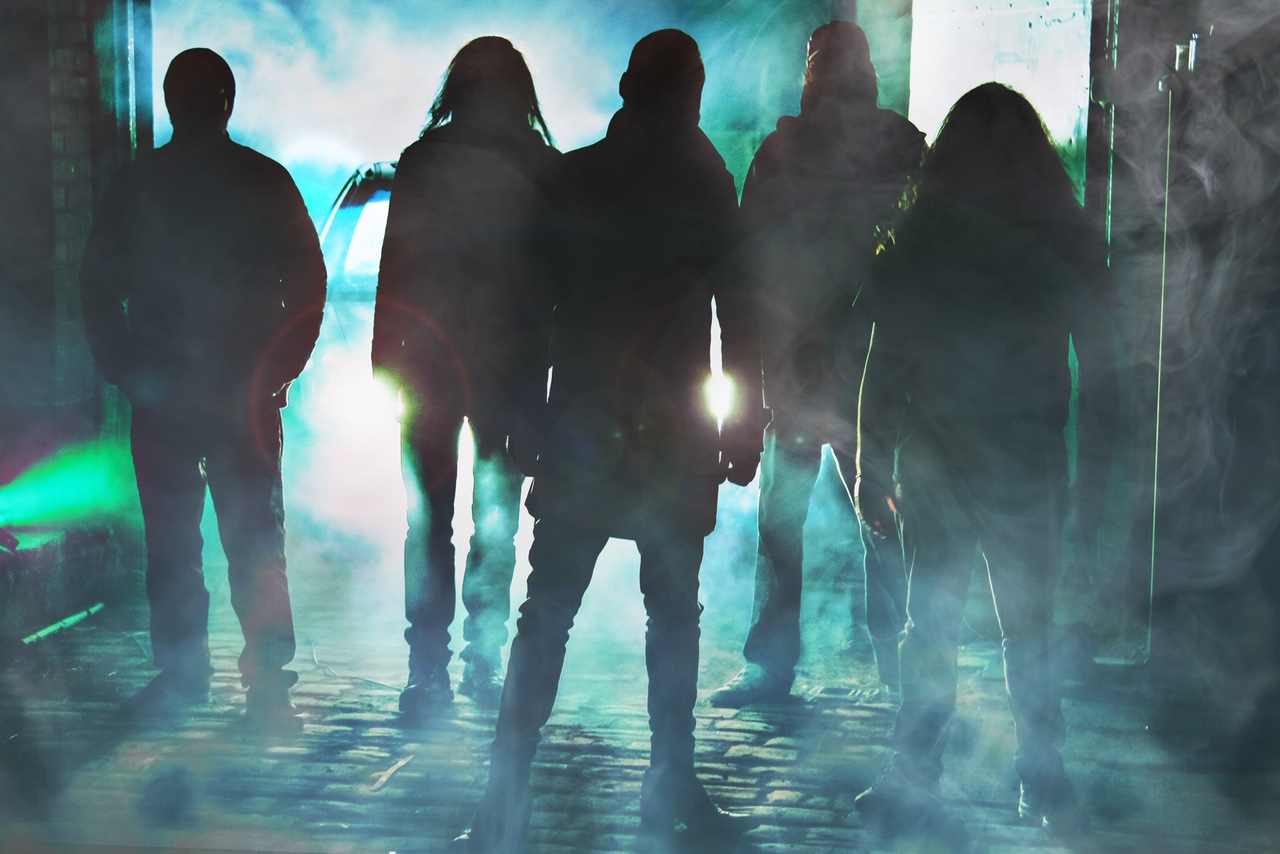