Album Review: Throwing Bricks - What Will Be Lost
Reviewed by Neil Bolton

Initially a rowdy hardcore unit, Throwing Bricks have now slowed down to produce 'What Will Be Lost'. This five piece emerged from the shadows of Utrecht, The Netherlands, to finally release their debut full length album. They have worked with Catacomben Studios and Wessel Reijman, with the intention of capturing the feeling of a Throwing Bricks live experience.

Track one begins 'What Will Be Lost/Won’t Happen Again' with a nice melancholic bass line, shortly joined by the guitar. A perfectly brilliant stoner riff begins to envelop the air and the vocals begin. A shouty growl the is low in the mix, but certainly not hidden. The riff continues to lull you in until the blast beat and shouty death/screamo section of the song. The hints of their original sound take you along to the end of the song. 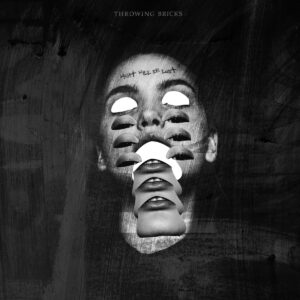 'Day He Dies' has once again a nice bass line that this time is much briefer. We bang very quickly into a Slabdragger kind of sounding tune. A world I am very happy to inhabit. The riff once again is a powerful hook keeping me interested. The third track 'Constant Failure' is different this time, it contains no foreplay and no subtleties. Manic blast beats, manic vocals, manic guitars are what you get here. Once again the different song structure keeping the listener interested and intrigued. This slightly shorter number leads into the atmospheric 'Ceremony'. A haunting guitar sound with with a similar tortured vocals ripple through track until its completion.

Patterns Rise' has a slightly more hardcore feel with the manic vocals hitting out again. Until 'Glass Queen' comes riffing into view where once again the vocals are lurking menacingly in the background, and the music sounds excellent. A tribute to the mixing on this album. An angle some other recent albums by other artists have fallen short on. A dark brooding beginning to 'Galling' calms to soul, until the punishing riff takes your head off. Head placed firmly back on the final song begins, 'Ready To Fall' has all the elements of the previous tracks all in one. Once again this album sounds both lovely and nasty, an important mix in this genre of music.

This is certainly doom metal but with a bit of small amount of hardcore/screamo to season the dish. The addition of these elements does not overpower the plate, they just add something to the 'Throwing Bricks' experience .