Carach Angren are a dutch symphonic black metal band that formed in 2003 and since then have released six albums including their new release 'Frackensteina Strataemontanus' which is due out on June 26th via Season Of Mist. The unique thing about the band is that each of of their albums are concepts based on folklore and ghost stories. Their latest release 'Frackensteina Strataemontanus' tells the story of Conrad Dipple who became the inspiration for Frankenstein. 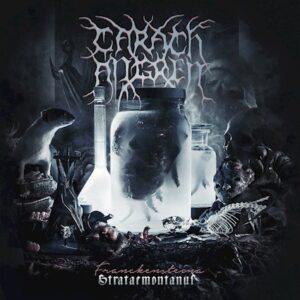 'Franckensteina Strataemontanus' starts with a narration setting the scene for the story before ripping into the first track of the album. To say that they went all out for their first track is an understatement and left my blown away and dying to hear more what they had to offer. The recording features ten amazing tracks that you could tell the band were very passionate about by the quality of the music.

The production on the album (as with most of their records) is excellent, a perfect mix of black metal and symphonic elements. I found with some songs like ‘Scoraged Ghoul Undead’ becoming lost in the symphony playing in the background and then being bombarded by the guitar riffs and fast tempo of the music.

All of the music revolves around tell the story of Conrad Dipple. The tale is well told throughout the album and the emotions of the story were very clear, you can feel each emotion expressed and this makes the album so interesting to listen to, played along side some awesome symphonic black metal this adds up to a great album that I have found in my regular playlist ever since giving it a first spin.