Formed in 1992 in Czechia, Scabbard existed until 2000, releasing a slew of demos and two albums. Emerging from the ashes of Invar and Bastard, the original line-up comprised bassist and vocalist Alex Varmuža, drummer Jirka Soukup and duel guitarists Libor Vaškových and Pavel Zlámal. With a direct fusion of death and thrash metal, Scabbard released their first demo ‘Soudný den’ (Judgement Day) which was followed by 1993’s ‘Nonsense War’ and the 1994 demo ‘Better to Die’. All demos garnered a decent response. In 1995 Petr Vavřik joined the band, taking over vocal duties and adding keyboards. The band’s first full-length album ‘Beginning of Extinction’ was released on the label Deathvastation Productions and was promoted with tours with Vader, Destruction, and Krabathor. The second full length release arrived in 1999 entitled ‘Extended Mirror’, released on Sheer records. Sadly, guitarist Pavel was diagnosed with cancer which caused the cessation of live shows. The guitarist died not long after, and Scabbard cease to exist.

Scabbard reformed in 2016, with the line-up now bassist and vocalist Alex Varmuža, drummer Dan Slezák who played keyboards on ‘Extended Mirror’ and new guitarist Tomás Král. The band are working on a soon to be released third album, ‘Evil Realm’. In advance of that, Awakening Records have re-released the band’s three previous offerings. 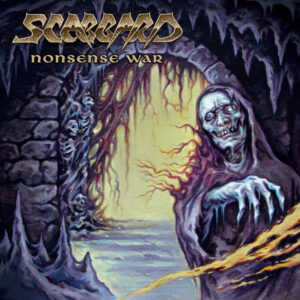 ‘Nonsense War’ and ‘Better To Die’ are released in a combined form. Eight tracks from the former and the three which composed the latter. They are certainly raw and the production unsurprisingly muffled. As Scabbard chug into opening track ‘Holy Demogogy’ (which follows the introduction which uses a segment of Carl Orff’s ‘O Fortuna’, most famously used by Ozzy), their early influences are clear. Everything from Venom, Slayer to Possessed, Death and Obituary is included in the next 50 minutes. Whilst the guitars are low in the mix, the chopping riffs and power strains to escape with ‘Nonsense War’ a heady mix of brutal death and thrash metal. Varmuža’s vocals are guttural, rasping but work. Tracks such as ‘Raped’ and ‘Evil Death’ show promise with slower passages matched by bursts of aggressive pace. The three tracks from ‘Better To Die’, ‘Poltergeist’, ‘Last Performance’ and the title track benefit from a slightly improved sound quality and demonstrate a progression in the writing with the opening song a bludgeoning beast, employing gargantuan crushing riffs. It’s still far from perfect but the raw passion and energy makes this an enjoyable listen. 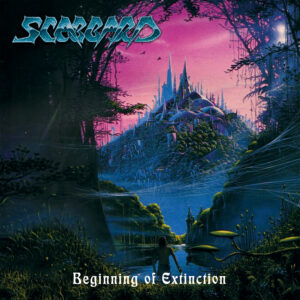 Things develop on ‘Beginning of Extinction’ with a massive improvement on the production. Maybe not for the old school death metal purists but the clarity of the lead guitar, the vocals of Petr and the whole structure of the songs provides a much better aural experience. Scabbard experimented for the first time with keyboards on this release, with an unusual soundscape which fleetingly flirts into black metal territory during ‘The Hall of Souls’; unusual but not unpleasant. Reworked versions of the three tracks from ‘Better To Die’ are also included on this album with the title track a pulverising monster, which is barely restrained at times. Searing razor-sharp guitar work blends with the driving battery and the band once again split the sound between concrete shattering death metal and a form of black metal which provides a neat diversity. ‘Beginning of Extinction’ sees the band using more melody and variation, with the intros to several songs including the title track acoustic in nature before making way to more aggressive and impressive weighty sounds. This didn’t stop Scabbard changing style, and the more abstract style that appeared certainly challenges the listen. Possibly the standout track on the album, ‘Materialised Insanity’ could be classed as experimental in many ways, the slow almost doom pace, use of keyboards which mix with swirling guitars and thick riffs in a kaleidoscopic combination. The album also features a rather fine piece of art on its cover. 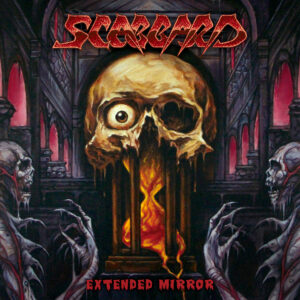 The final album is 1999’s ‘Extended Mirrors’. Scabbard maintained the tradition of an intro to the album before the punishing title track opens things up. With Petr departed, Alex takes back vocals and does a fine job. By far the best production of the lot, ‘Extended Mirrors’ is shorter than its predecessor by a good 15 minutes. Dan Slezák who will return with the band as drummer in 2016 plays keyboards on this album, and once more their use provides an interesting talking point. Scabbard’s music is at times brutally direct, searing blast beats and ferocious guitar work racing at breakneck speed, yet at times the band morph into a much gentler style. Witness the total change in approach on ‘It Means Nothing’ as an example. Lyrically, the album takes a darker stance, focusing on futility with songs such as ‘It Means Nothing’, ‘Human Waste’, ‘Darkest Prison’ and ‘Live Fucked Up’. Scabbard also introduced different styles of vocal delivery on this album, using narrative alongside Alex’s guttural delivery. All of these changes took ‘Extended Mirrors’ far away from their early chaotic raw works. As with the debut album, ‘Extended Mirrors’ includes a couple of short instrumental tracks, the pick here being ‘The Fate’. This is an album whose schizophrenic approach is both refreshing and experimental. I like its honesty and deeper feel but could easily see how some may have found it a challenge.

Each of these releases has merit. The raw demo quality of Nonsense War contrasts with the development demonstrated in Beginning of Extinction whilst ‘Extended Mirrors’ provides evidence of the experimental pathway that Scabbard were exploring at the time of their split. Album number three should be an interesting release and it will be fascinating to see how the new line-up moves the band’s sound forward after more than a decade.