If you have spent any time in and around the stoner rock, fuzz, doom scene in the UK over the past decade then you will have no doubt run into twins Ryan and Elliot Cole. The bearded brothers founded Desert Storm ten years ago, a band who have built themselves into one of the contenders for Orange Goblins crown as kings of stoner rock in the UK.

Within the restrictions of 2020’s multiple COVID related lockdowns the brothers got a little bored and occupied themselves putting together a new musical project to keep themselves busy. The outcome from their work is ‘Wall’ and the self-titled debut E.P. 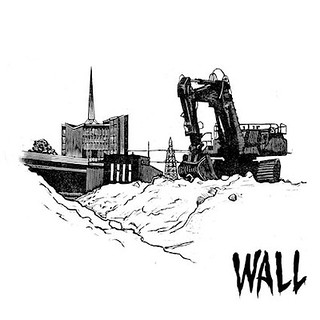 From the fuzzy dark opening of ‘Wrath of the Serpent’ it is evident what the pair were aiming for. Lashings of early Black Sabbath worship give the listener that warm feeling of familiarity. But this is no carbon copy, the brothers alter the pace and direction of the song keeping it fresh and the listener enthralled despite the lack of any vocals.

‘Sonic Mass’ takes a darker direction, the haunting sound of the feedback in the intro leading into a riff that makes the hairs stand up on the back of your neck. ‘Obsidian’ is a slow burner, lacking in pace but with a determined bass line that keeps you on your toes. Elliot is then allowed to shine (not that he hasn’t already) but the majestic drum intro to ‘Legion’ is almost hypnotic and then Ryan’s guitar kicks in to allow the E.P. to finish with a crescendo of fuzzy, doom inspired beauty.

At no point on the record do you notice that there are no vocals. So strong is musical direction of the project that it is not until bonus track, a cover of Black Sabbath’s ‘Electric Funeral’, kicks in with lyrics sung by guest Dave Oglesby that you even notice there has been no vocals throughout the four original tunes.

For those who worship at the altar of Tony Iommi, Wall’s selt-titled debut gives your new year the kick start it deservers. Doomy majesty dripping in Iommi inspired riffage!

'Wall' is released via APF Records on January 15th.