When I first pressed play on Enforcer’s new live album ‘Live by Fire II’ I thought wow, my stereo has turned into a time machine, and I was back in the ‘80s, and I mean that in a good way. Enforcer are a 4 piece band from Sweden, led by brothers Olaf (Vocals and Guitar) and Jonas Wikstrand (Drums) , that use an eclectic blend of styles, ranging from NWOBHM, late 70’s hard rock, 80’s speed metal and turn it into something of their very own. This 17-track live performance was recorded back in 2019, in Mexico City, and led to a phrase I had never heard before, and I think unlikely to hear again; “Come on Mexico City, capital of Heavy Metal!”. Not a band I can say I’ve heard before, I have to say, I really enjoyed this album, the band can certainly write a song, and they are more than adept at coming up with hooks and choruses that stick in your head. 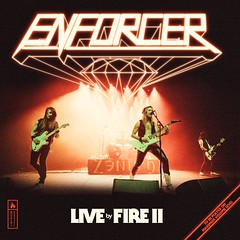 Starting off with two new tracks from their latest album 2019s 'Zenith', the first of which is 'Die For The Devil' which recalls heyday Scorpions with its use of dynamics: quiet verse and power chord driven chorus while 'Searching For You' is a real hybrid with its mostly primetime speed metal structure but with a chorus that Mötley Crüe would be proud of, it’s a strange old concoction, but works surprisingly well. There follow a few older tracks from the ‘From Beyond’ album, the out and out speed metal of ‘Undying Evil’ and the hugely singalong title-track. And the majority of the album follows suit, you have the almost jarringly poppy 'One Thousand Years of Darkness' with its gang harmony backing vocals, rubbing shoulders with speed and thrash influenced tracks like 'Live For the Night' and 'Mesmerized by Fire'. It finishes strongly with obvious crowd favourites 'Destroyer' and 'Midnight Vice' In fact, there is a bit of something for every metal fan going on here, OK maybe not Brutal Technical Death Metal fans, but for the majority there will be a lot of tracks that are going to be of interest.

I’m not sure if 'Live by Fire II' is a Covid release, in that the band wanted to get something out there to keep the momentum going, or it was something already in their plans, whichever, it’s a quality release, and if you’re a fan and already have 'Live by Fire I' and are wondering whether this is going to be value for money, I can tell you that although there was always going to be a little bit of duplication, there are 10 tracks on offer on this new live offering that aren’t on the first one, which I think is pretty good value, both for existing fans and for those who have never heard of the band before, but are curious, I’d say this is a pretty good starting point.

My conclusion is that this is an almost faultless depiction of an Enforcer live show, and they are the sort of band you could go and see, say supporting a bigger band, and not know any of their material, yet still have a really good time, there’s an energy and enthusiasm that the band give out that translates well onto album. Olaf is a very charismatic (if slightly cliched) frontman, really getting the crowd going, the sound is excellent, all the instruments sit well in the mix. The crowd might be a little low in the mix, but that’s better than them being too loud and intrusive. The bottom line is this, If I was told that my first post-pandemic gig was going to be Enforcer, I wouldn’t be disappointed in the slightest.