The pulsating urgency of ‘Nexus’ ensures a heightened level of energy is introduced from the very beginning of ‘Ghost Notes’. A theme and factor conveyed throughout this richly dark and vibrant E.P. Tightly woven, stabbing guitars, throbbing bass lines and an anthemic drive hint at the heaviness of metal within the cannon of Shrines yet the repetitive licks and minimalism employed suggest they are fully embracing ‘Post Punk’ as major part of their being on this their first release since 2015’s self titled debut.

Deceptively weighty the opener ‘Nexus’ stomps along with a sinister feel made even more impacting by the warming ethereal croon of the lead vocals. Whilst richly unique, they hold such a prominent place within the music. The haunting voice is a perfect communion for the sophisticated sombreness of the absorbing music. 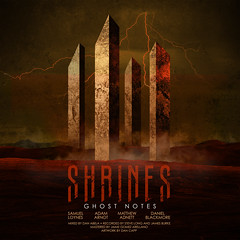 The air of melancholy that has been created continues with the goth infused ‘Connexion’. The driving and dominant drums are the highlight yet the quivering guitar shines through. Clever notes dance around while chugging riffs maintain the constant darkened heft. There is certainly enough vigour and weight to appease those in need of a dose of metal. The blackened roots that Shrines have running through their progressive veins is very much still a part of their very being. Hints of doom are layered into the songs which adds to the sonic density. As the metallic tinged ‘Relics’ races along you can’t helped be pulled into the maelstrom of juddering riffs. Crushing as its is catchy, the soaring chorus and emotive lyrics are played out with such an enthralling and impassioned delivery.

What begins as a possible chart bothering ballad with its gorgeous stirring keys ‘White Light’s goosebump inducing intro gives way to familiar punked up blackened metal. Swathes of pulsing chords further push the song on again ensuring that wistful dark tone is maintained. The punky riff driven punishment is delivered with an unnerving menace whilst equally engaging enough to let the hypnotic and progressive feel radiate through. The ever present atmosphere, which has been a constant and such an integral part of the Shrines sound shows no signs of diminishing, again fully immersing itself as this E.P. comes to a close. .

There are moments all over ‘Ghost Notes’ that will impact on you quite unexpectedly. At first the technical brilliance of the songs may not be apparent rather the immediate catchiness. However, with time a sense of warmth radiates from the gloomy darkness to reveal quite a bizarrely uplifting set of songs. Such are the absorbing lows you may find, you get sucked into their tightening grip yet the highs littering this sumptuous and darkly brilliant E.P. whilst so fleeting do have a greater impact and indeed a profound emotional effect.