High Roller Records seem to be the place to be if you want reissues of the more obscure, underground and forgotten classics in the world of thrash and traditional heavy metal. Their latest reissue is the seminal demo tape of legendary German thrashers Destruction. 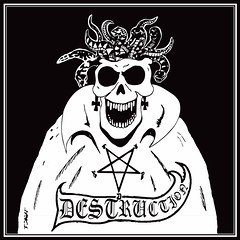 Bestial Invasion Of Hell was originally self-released by the band in 1982 and eventually led to a record deal with SPV Records which led to the release of the bands debut EP Sentence Of Death in 1984. It was recorded live over the course of a few hours and demonstrates the raw thrashing power of this band in their early days. The songs are mostly ones that would eventually be re-recorded for the 1984 EP including classics such as Mad Butcher, Total Desaster and Tormentor with only Front Beast being a song unique to this demo. The versions here whilst a little less refined are not too dissimilar from the versions fans would come to know and love and whilst the band are a little more sloppy that is half the charm. The main appeal of this recording is the fact that this is 1982 and for that era this material is pioneering and way ahead of its time. Thrash metal as a term at that time did not even exist yet here is thrash metal in all its raw and nasty glory. The recording quality, although cleaned up, is excellent and sounds better than a lot of professionally recorded albums from underground thrash bands in the 1980’s. As well as the six song demo we also have some rehearsal recordings added on which show early versions of Death Trap and Invincible Force. The quality of these recordings is shall we say lacking but they were recorded on a cheap tape recorder during band rehearsals and whilst the sound quality is poor it is great to hear early recordings of the band thrashing away.

Whilst this re-release is unessential except for the thrashaholics it is great to hear the Destruction demo is all its glory and it still stands up well today. It is easy to see how Bestial Invasion Of Hell led to Destruction being signed and the rest as they say is history as Destruction continue to be a force to be reckoned with in thrash metal in 2021. A great thrash history lesson.