The first time I heard UK legends Paradise Lost, I remember it like it was yesterday, I was 18 and myself and two mates were changing the engine in my Mark II Escort, it was in my mates Dad's garage in Builth Wells, it was a cold evening in January 1990, and while struggling with our task we were also listening to the late great John Peel's radio show when suddenly this heavy, sludgy, death/doom metal started coming out of the radio, all three of us downed tools and just stared at each other in shock and awe, we were all fans of heavier music in one way or another, and this stood out as something special. I had already read about PL and mentioned to the others that this might be them, and I was well chuffed when it turned out to be 'Deadly Inner Sense'. Obviously at the soonest opportunity, I headed off to Rainbow Records to pre-order the first album 'Lost Paradise', and by the way, I travelled in said Escort, as the engine change turned out to be quite a success!

My next memory is being in Manchester, the reason for which eludes me, it was probably a gig, but I honestly can't remember why. Anyway, I was in some record shop or other, and I spotted 'Gothic'. Well, my budget was a bit limited, but I managed to stretch it out to purchase the sophomore release. And I wasn't disappointed, the progression the band had made with composition, production and the sheer breadth of ambition of their song craft was staggering, and many times that of the debut, and it's still one of my best loved PL albums, if not my favourite. You’ll probably be wondering what I’m rambling on about, and what has this got to do with the latest release, well it reinforces how long the band have been a British institution and also my association with them. 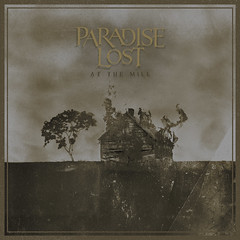 So, let's fast forward 30 odd years to this latest release 'At the Mill', like so many acts in these strange pandemic times, the band have had to look at new means of getting across to their fans, and came up with the idea of playing 'live' but in an old disused building, the Mill nightclub near Bradford. Deciding not to pretend that they were playing in front of an audience but instead treating it as almost a 'live lounge' type gig, or a recorded live rehearsal but with a full-blown production, the final product is going to be available in several formats, both audio (CD and vinyl) and visual (Blu Ray). My review copy is for the audio version only, but the setlist is the same for both, although the later has some nice extras: a behind the scenes documentary and a fans Q&A session.

The setlist covers pretty much the whole spectrum of the band’s career, although not every album is represented, but remember, this is a band with 16 studio albums under their belts, so it was always going to be impossible to cover every one, in fact the songs are pulled from 11 of the 16, over the course of 16 songs. Tracks from ‘Gothic’, ‘Shades of God’ and ‘Icon’ some of the bands earliest releases are all represented, rubbing shoulders with new tracks from ‘Obsidian’ and ‘Medusa’ the bands latest albums, and if you weren’t a fan, you’d never know that there are over 25 years separating some of these songs, which just shows the consistency of the bands output. ‘Obsidian’ is unsurprisingly the album represented the most, having been denied its own touring cycle due to the obvious Covid restrictions, even the bands most controversial release ‘Host’ has its opener ‘So Much is Lost’ on show, and in this live setting, it easily holds its own with its supposedly heavier brethren. The whole setlist is very good, although as with all such albums, someone’s favourite is going to be missing, in my case it’s ‘Fearless Sky’ from ‘Medusa’, but hey, you can’t have everything.

And that is one of the strengths of this release, all the songs are all very much Paradise Lost, all display that miserable Yorkshire character, and I mean that very much as a compliment, the decision to not have fake crowd noises is very much used to an advantage and gives this release a unique character very much its own. There is a fragility and energy to the performance, you can tell the band members are revelling in each other’s company, and loving actually playing music together again, just the sheer, pure raw emotion that pours out of the speakers is quite tangible and gives the listener the sort of connection that is unlike any other release I have heard, it’s like having a private performance from the band in your own living room, your car, on your sofa with a pair of good headphones or wherever your choice of listening is, just turn up the volume and immerse yourself into the naked passion that is on display, the sound is perfectly captured by long-time collaborator Jaime Gomez Arellano with a really heavy and organic feel to the whole thing.

In conclusion. This a splendid album and is the next best thing to seeing the band in concert. Simply stunning.