It only seems like a few months since I was reviewing the last Sodom full length, the rather wonderful Genesis XIX, but it turns out that was back in November last year, over 8 months ago. Time flies when you're having fun or getting old!

So here we have a new three track E.P. from the Teutonic legends, two new tracks and an update of the 1987 classic track 'Bombenhagel' originally from the brilliant ‘Persecution Mania' album. Let's deal with the re-recording first, ever since its original release 'Bombenhagel' (translation: 'Hail of Bombs') has become a staple live track. If you've never heard it; firstly where have you been and secondly it’s an almost 'fun' song that deviates slightly from their other material in that it is much more punk influenced and is led by Angelripper's gnarly bass. It has this raw energy and is very much inspired by the metal Gods Motorhead and Lemmy, but also adds in melodies and a section of the German national anthem into the arrangement.

Well for this 'new' version, the current members have a bit of a party with it and take advantage of the advancement in technology and recording techniques. Immediately it is obvious that this version sounds much heavier than the original, which did suffer from a thinner 80s production. This new edition adds a few new embellishments into the mix, and the song is a whole minute longer now. Veteran German producer Harris Johns makes a guest guitar solo appearance, much like he did on the original. Whether it was necessary to have a newer version of this classic is always going to be up for debate, and up to each individual's taste about this modern obsession with re-recording old tracks. Personally, I enjoyed this interpretation, it certainly beefs up the sound, and introduces newer fans to this timeless stalwart, without spoiling the original. 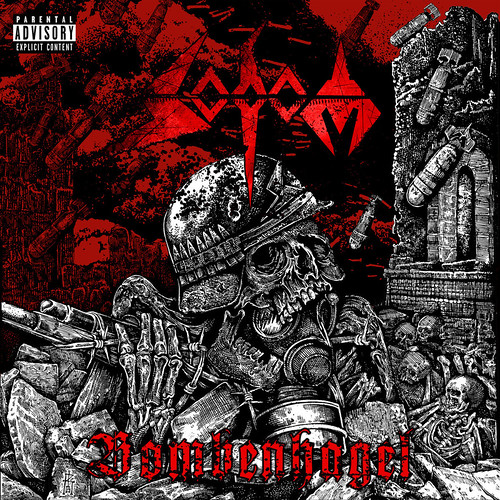 Of the two new tracks, both follow the more traditional Sodom template, in that they couldn't be by any other band, but at the same time are both distinct and have their own individual persona. 'Coup de Grace' starts with dive-bombing, squealing guitars and a frantic pace before settling into a more steady step. During its short 3 minute running time, it changes pace and direction several times and has a relentless chorus riff, and a great singalong refrain. Lyrically it's an interesting take on the famous 'Knock-Out blow' of the title, where the band look at mankind and how we are dealing ourselves our own deathblow, whether it's environmentally, social, and political interaction or just plain old-fashioned warfare, we are our own worst enemy.

'Pestiferous Posse' the third and final track here has another interesting lyrical idea where Tom makes interesting similarities between the current US political climate, what with Trump and the storming of the Capitol Building, with the infamous historical shootout at Tombstone in the 1880s between the lawmen, the Earp brothers, and the group of outlaws known as 'the Cowboys'. Musically to accompany this, the band have composed a magnificent thrash track, with a dark foreboding atmosphere, and a pulverising main riff and a very cool slower section with cacophonous clean picking to counter the brutality. Great stuff.

Originally, this E.P. was to be released to coincide with the summer festival season, but obviously this has again been devastated by the pandemic, but the band decided to release it anyway. If this anyway represents what the band has in mind for next year, as a taster for what will be their 40th year, in 2022, we are in for yet another Sodom treat.