As we are a science-fiction band, we’ll recontextualize this Devil’s Island to be the Devil’s Asteroid! We’re still shipwrecked, but in S P A C E

You're marooned here on this Devil's Asteroid, you got shipwrecked while sailing the seas on tour. Before you ended up shipwrecked you each grabbed one album that you couldn't live without. Which album did you each choose and why?

Ozymandias: Funnily enough, a similar scenario once happened to me! I went on a trip to Greece for 2 weeks and had uploaded all new music to my mp3… which crashed and left me with only Falling Into Infinity by Dream Theater. I still know every song by heart 10 years later. My pick now would be Casualties of Cool by Devin Townsend. It’s long, diverse, and incredibly produced. I could sit and listen to it on repeat for days.

Harakoa: I would have definitely grabbed Within the Realm of a Dying Sun by Dead Can Dance. Nothing better than listening to this while shipwrecked in deep space. I would probably panic eventually from being trapped surrounded by the void, and this meditating and out-of-this-world music might make things worse at some point, but it’ll be an awesome experience until then.

Jotunbot: I’d have to go with Zombieshark’s I Will Destroy You, Myself, and Everything I’ve Ever Loved solely for the cybergrind aesthetic I imagine this scenario bringing. That, and I love the album.

Votson: It’s a hard question, because there are so many… I will go with the first Jamiroquai studio album, Emergency On Planet Earth. Which is maybe why I’m in a Ship in the first place… As a bass player, there are so many iconic bass lines on this and the groove is so real, it makes my body move before I realise I’m dancing! This would help if we want to turn the shipwreck into a Dance Club on an asteroid.

Krøgorlön: I think I would choose Black Dog Barking by Airbourne because that album kicks ass and it would keep me motivated and pumped while I look for a way to escape this asteroid. Plus hard rock is usually easy to play along if I ever make myself a music instrument of some sort.

Just behind that alien palm tree is a shack for each of you to sleep in, with enough space for you to put up a poster on the wall of one album cover. What album cover do you each choose and why?

Ozymandias: I’d put up Citadel by Ne Obliviscaris. It would remind me of home since it has been hanging in my room for years.

Harakoa: Pink Floyd’s Meddle. And then I’d regret not having this album anymore…

Jotunbot: I need as much space as I can get, screw posters!

Votson: Just to cut our appetite a little, I’ll go with Frizzle Fry by Primus…. Miam...

There's also a bar on this here space rock. But alas each of you only get to choose one drink for the entirety of your stay. What's your tipple of choice?

Ozymandias: I cannot digest alcohol, so i’m a teetotaler! Give me a nice London Fog!

Harakoa: Uh. Do I go for lemon radler (aka expensive lemonade) forever until my belly blows up, or do I go for Jägermeister, delirium, and visions under the sun? I don’t know which way to die here…

Jotunbot: To respond to Harakoa, “yes.” Personally, if water doesn’t count, I can’t shake my caffeine addiction enough to not pick coffee. It’s nice, refreshing, and technically if I add various alcohols it still counts as one drink!

Votson: Simply a Gin Tonic. And I love Gin so much, I can always forget the Tonic! Or just drink the Tonic water….

Krøgorlön: Don’t know how to call it in english so I would take a Clou Rouillé, a shot of whiskey in a pint of beer.

Your suitcases were lost when your ship crashed, but you each managed to salvage one item of band merch. What’s the merch and for what band?

Ozymandias: A Lindsay Schoolcraft blanket! It’s gorgeous, and it’s practical in a survival situation, especially in a cold inhospitable world.

Harakoa: I don’t have band merch. What kind of survivor am I? I’d like to find back my lost Katatonia sweatshirt.

Votson: The Kiss coffin. If I die here, at least it’s going to be with the soul of Rock and Roll!

Krøgorlön: A phone with Legacy of the Beast from Iron Maiden cause now I have a phone

You’re sitting on the asteroid thinking “I’m stuck here on this rock with my bandmates for eternity”… who would you rather have been shipwrecked with?

Jotunbot: Harakoa and I crack puns like eggs, so while I don’t have an answer for this, I’m sure I vouch for everyone else when I answer with “anyone but us two.”

Harakoa: Meh, it’s alright, although I’m gonna miss my girlfriend. I guess I’ll make puns until everyone is mad. Once we lose it, we can pretend we are anyone we want to be.

Jotunbot: I mean, I already pretend to be a good musician, sooooo...

Ozymandias: I spent the last 7 months on lockdown with my 4 roommates and my girlfriend, and I couldn’t wish for a better team to face hardship with. Plus,they have a diverse skill set, so we’d be better equipped to survive than this bunch of no-good musicians (jk, i love you guys)!

Votson: Prismo in Adventure Time and I’ll wish for a Sandwich (If anyone gets my reference)

Krøgorlön: Mark Watney from The Martian. I don’t intend to stay there. 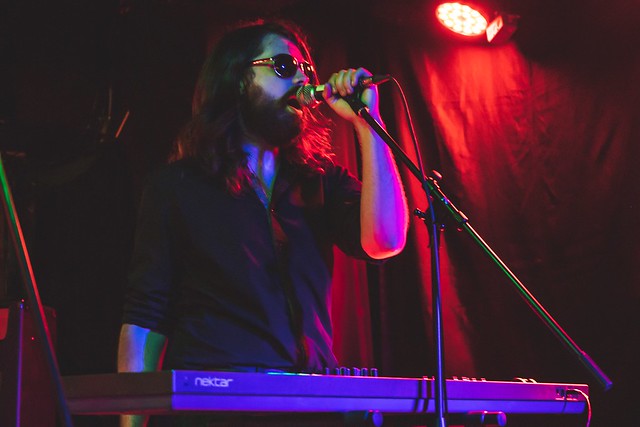 Harakoa: Jeff Martin’s live show I went to see in Montreal in 2017 for my birthday.

Ozymandias: The tape would be of the Boris 2016 show in Montreal. They played a small hole-in-the-wall venue of only 200 capacity and it was mental! The energy they put in their performance and their command of the crowd was impressive. The venue felt like a sauna at the end. They played Pink, my favourite album of theirs, in full, ending on a glorious 12 minute wall of noise.

Jotunbot: I got to sit in on a Neil Peart masterclass. You can’t beat that, full stop.

Votson: It has to be the first time I saw Alaclair Ensemble at the Club Soda in Montreal. It’s the show where it ended with a Mosh Pit on Les Copains D’abord by George Brassens! If you don’t know who this guy is, he is an old french singer who plays Jazz Manouche style guitar… pretty metal I say! Plus the show was amazing, like always.

Krøgorlön: Lady is a Tramp by Frank Sinatra performed at the Madison Square Garden in 1974. No real reason, just used to listen to it when I was a kid and nostalgia and stuff.

Jotunbot: I choose not to answer this on the grounds of “whatever I write will probably be a meme.”

Harakoa: Same. I’d just find the most terrible puns about our situation. Plus, I don’t know about bands. Seriously, I’m terrible. Well, in a Simpsons episode, Sting rescues Bart trapped in a well... Does this count?

Votson: Well, Brian May, Queen’s guitar player is also an astrophysicist so I think that’s a good choice… It could also be GZA from the Wutang Clan, who is also a science nerd… Depend on how I feel. Actually, I’ll probably call them both by stealing my band members bottles, seeing they would waste it on Puns….

Ozymandias: I’m calling Volkor X. He’s a space invader, so he’s gotta have a spare shuttle to save me, as long as I plead eternal fealty to the master of synth!

Krøgorlön: It will be addressed to Lemmy Kilmister cause if anyone can help me, it’s God.

Jotunbot: I’m the tallest and heaviest one here. I’ll take one for the team and hope Ozymandias levels up his drumming skills enough to make up for it.

Ozymandias: Can’t argue with Jotunbot’s logic. Their memory will live on as we replace them with a drum machine called Jotunbot-bot.

Harakoa: But as artists, don’t we live ‘’d’amour et d’eau fraîche’’!? Now, we lost the game forever… If I survive this, I’m turning vegetarian.

Jotunbot: Damn, I lost the game.

Votson: I will also make a sacrifice and offer myself….. to cook Jotunbot.

Krøgorlön: Jotunbot made me loose the game for the last time, they’re going in the pan!

Finally, when the ship crashed you each managed to save one person from the wreckage. That person is the one musician that has influenced your career the most, shaped your way of thinking and your outlook on life. Who did you save?

Jotunbot: Aldo Mazza. He may not be the most well-known percussionist in the world, but through taking lessons with him and the numerous percussion festivals he’s held that I’ve attended, I got to experience more styles of drumming than I could’ve ever imagined, anf was able to meet some of the biggest-name drummers in the industry, including Chris Coleman, Jojo Mayer, and the late Neil Peart!

Harakoa: My mother, Dominique Cousineau-Chevalier, is a singer. It is all her fault! I wouldn’t have been singing on this soon-to-crash ship hadn’t been for her! Plus, if she survives this crash, we would never tire of singing duos together until one of the band members murders us, so that’s fun.

Votson: I won't be original here, Victor Wooten. I mean, he is not just a awesome musician, but also a person with great wisdom and spirituality. We would meditate and grow plants together, it would be amazing!

Ozymandias: I would save Devin Townsend! He’s been a constant source of musical and personal inspiration to me over the years.

Krøgorlön: Louis-Phillipe Bonin, my sax teacher from the beginning of high school to the end of Cegep and the best sax player in all of Canada and the Galaxy! I pretty much owe him all of my career.