Alongside Frozen Soul and Civerous, Malignant Altar are one of the latest bands among this new wave of death metal who are now releasing their first full length record. I was highly anticipating when Malignant Altar would announce their first studio record, and now we’ve got one penned down for an early December release date. Formed in 2018 within Houston, Texas, the band released two Demos each in 2019 which have gone on to become pretty well received by early fans. Merchandise, cassettes and the like has already been created to promote the band so its evident that even this early in Malignant Altar’s career there was hype going around them. Now in late 2021 we can look forward to what they will finally bring to the table with Realms Of Exquisite Morbidity and especially having already being signed on to Dark Descent Records, a huge milestone for such a young band. So let’s delve inside and see what Malignant Altar wished to do here.

I like how the band exemplified the scope of their record not by giving their sound a massive soundscape (which they do anyway) but by tweaking the vocal performance in a way that gives it this slight echoing timbre to the delivery. It’s only a minimal alteration on the vocal delivery and it doesn’t impair the vocal impact the band provide us with, but just a small injection of this echoing sensation does ample to give the album an added depth of strength and scale to its performance. The record doesn’t just sound like it’s been nicely, neatly wrapped and packaged for us to digest, instead the vocals are emanating from somewhere we can practically touch but shouldn’t owing to the subject matter to which the band are playing and performing about. It should be appreciated however that the vocals don’t have an overtly strong echoing essence as I think we would have lost the vital impact the vocals provide us with bad Malignant Altar gone for something much more cavernous. Such a direction would do wonders for the atmospheric angle, but the vocals would have suffered unnecessarily if this had been the case.

This album is absolutely screaming Suffocation influences and it benefits all the more because of it. By this point, we’ve heard a good share of newer death metal records that have attempted the crushing or cavernous angles made legendary by bands like Incantation, Morbid Angel etc, but this is the first time I’ve come across a new work of death metal that has particular Suffocation influences flowing through its songwriting. The way the riffs may suddenly come back with sludgier, steadied and sinister tones intensifies all the while the drums maintain their tempo even as the bass drums are approaching breakneck speed. It’s this specific combination that made bands like Suffocation iconic in the first place and it’s a wonderfully pleasant surprise to here within this record. What’s more is the band’s tendency to stop their performance outright and then bring it back a few seconds later once that pause has made its impact, with songwriting that feels much more devastating and punching to the listen. It’s all well-coordinated and you can easily imagine how tight-knit the band need to be in order for that sense of timing to be on point at all times throughout the record. 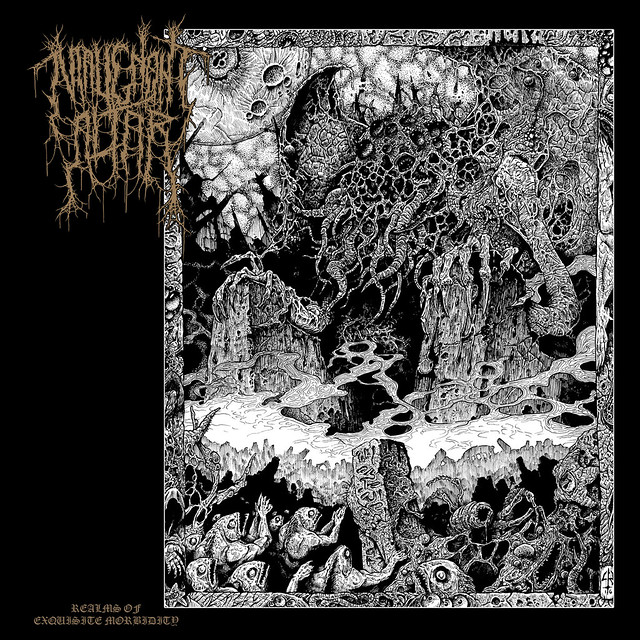 Speaking of which from earlier, this album might have some of the most vicious and racing double bass drumming I’ve heard in a while. Returning to that Suffocation influence you can hear it in how the bass drums are absolutely slaughtered to produce the pace that the band are after and yet the drums are never being thrown in your face. Other such bands have shoved powerful feats of drumming in front of us before, but by pulling back their drumming within the mix it’s enabled the drums to strike with greater clarity and resolve. By holding back their drums and positioning them in a location further back in the mix, the audience is thereby able to experience and receive everything the blast beats and Tom-toms and bass drums can give us without them feeling like they’re undefined and without shape had they been simply jutted in front of our face. The drums here are a great example as to why sometimes less is more, and why you often need to withdraw what you want to showcase for your audience to truly take in everything you’re there to offer them. You want to get their attention, but not at the risk of them losing track of where they are and what they’re actually listening to.

The band are certainly playing death metal that much is obvious from the start, but I liked how they weren’t simply going for speed and ferocity alone. During the sections especially where their riffs and performance slow down, the power they bring to you not only intensifies but the pacing at which they perform at decreases. While the general tempo of the record enables you to receive a great dose of strength at all times, it’s pacing has a particular ability to calm itself down from time to time so while you recognise the band are playing at speed it doesn’t just feel like they’re throwing vast quantities of ferocity at you for the sake of speed alone. The songwriting here has the capability of masking its speed for something that is actually much steadier than you initially think it is. Drums can play at stupendous speed, but the guitar riffs may move at a snail’s pace or the riffs could suddenly pick up intensity only for the bass to dramatically slow down and exert its gigantic presence right in your face. It’s like a dance whereby each of the instrumental and vocal elements are all interweaving and moving about and around each other for what the songwriting and audience may be requiring. Nothing, sonically speaking, is cut and dry and totally fixed from the band’s perspective. Everything is fair game from a mixing and technical standpoint.

In conclusion, Malignant Altar’s debut full length release is something more than just your conventional death metal record. After listening to most of the record you’ll soon come to realise how much is actually going on behind what you can immediately hear, and how the structural and technical reasons behind the songwriting and mixing positioning has all been done so for very deliberate reasons. The influences Malignant Altar have undertaken throughout their songwriting and identity may be apparent but they never feel like they’re used as some retro crux that the band need to lean on in order to grab their audience’s attention. This is Malignant Altar through and through, so while I can absolutely cite the Suffocation influence, this is absolutely a work of their own craft, time and effort which certainly shows. It’s also nice to acknowledge how each track brings something a little unique to the others here, it’s not a six track album that’s been replicated each time for each track you’ll experience. I think people will take to this album but then keep coming back to it, it’s got a strangely alluring and addicting quality to its performance that you can’t shy away from. I’ll be having this album on my mind for quite some time from here on out. Highly recommended for sure.