Its been some time admittedly since I checked out anything out from Greece, but with Abyssus’ upcoming sophomore release it is time to make such a correction. Formed in 2011 and hailing from the capital city of Athens, Abyssus have been extremely prolific in nearly every avenue aside from full length material. Aside from one or two particular years, Abyssus have released some kind of EP and/or Split for every single year they’ve been together and when you consider how some bands may only release one EP every couple of years, that’s pretty good going for the band. But it wouldn’t be until 2015 when the band would, at last, release their debut studio record titled Into The Abyss. It would appear this album was received pretty positively by fans, so positive in fact that Death Revival, upon its release, will mark the nearly seven years it has taken for the band to exact, record and release a follow up album. An awful lot can happen in such a space of time but for Abyssus, that time has been spent in all fairness in releasing some kind of material nearly non-stop. I kept seeing this album crop up across my social media for the last few weeks and its clear that there is some kind of mounting hype regarding its release, so I knew I couldn’t shy away from an opportunity to work out what was what. This is Abyssus’ second album: Death Revival.

What struck me pretty much instantly was how the band’s guitar tone is so much thinner than what most death metal bands and albums these days would present us with. The production additionally, is not geared towards a super crushing or devastating impact. You’re fully able to breathe and relax while the band are playing at great intensities, with that said however the band’s riff work feels a lot attuned to a razor-sharpened and keen edge than other death metal acts lately have been offering. As a result, by lessening the production’s ferocity at which the band deliver their songwriting, they’ve been able to produce a soundscape that’s much more visceral and all-consuming precisely because they’ve enabled you to take in everything they present herein. There’s no possibility of missing anything, nothing feels muted or dulled or overpowered by an overabundance of downtuned power.

This feels all the more amplified by the band’s ecstatic Death influence. I don’t mean this in a songwriting manner but simply one minute of listening to the vocals immediately harkened me back to my first experience of Chuck Schuldiner’s own vocals throughout records like Scream Bloody Gore and Leprosy. That early Death, curdling blood style of raspy vocals is extremely apparent with Abyssus, and in some ways heightens the impact of the band’s performance. Since the record hasn’t been produced with a gigantic soundscape in mind and thereby enabling the listener to not miss a trick, it allows the listener by extension the ability to fully grasp the severity and strength the vocals are infusing the band’s sound with. The vocal octaves may not be rising and falling all that much throughout the record but, the tone and timbre harnessed by the vocals are what give Abyssus a unique identity without it feeling like they’re merely crunching on established OSDM. 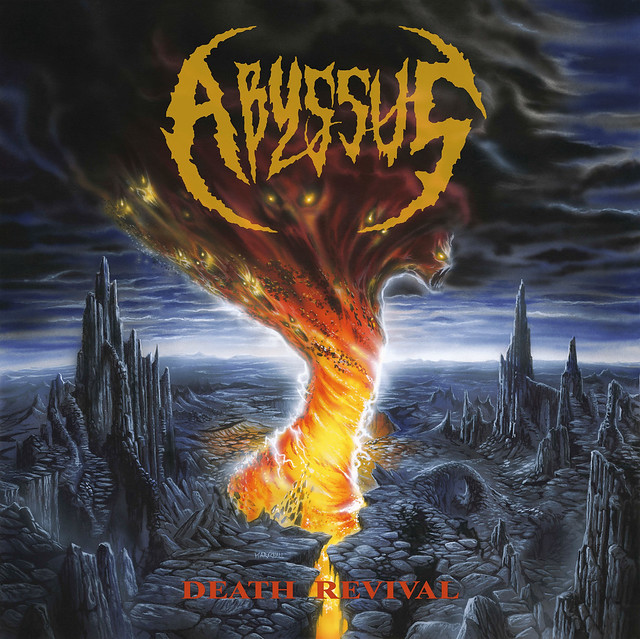 This may sound odd but I appreciated the drums for not being super technical or devastating in their performance. This is true old school death metal in that the drumming is very down to earth and conventional. There are no blast beats to be found anywhere within the record, instead utilising the drums give us a straight up drumming performance that doesn’t deviate from anything we’ve heard before in any form of rudimentary metal. That’s something which can be said about the album on the whole: there are no special tricks or flowery techniques implemented by the band. It’s a 2022 death metal record that doesn’t strive to stand out through more brutal and exasperating minutiae, what qualities we experience and appreciate here is solely a result of good, old fashioned songwriting craft and instrumental performance. It’s also another example by which the band leave nothing getting in the way of your enjoyment of this record, they clearly wanted to keep any extra and unnecessary elements out in order to keep their record without clutter.

The fact that this album runs for just past 30 minutes makes me happy. The quality of the record is absolutely apparent however I loved how it didn’t run on for too long, I believe it could have been very tempting to let this album run on until it’s around 50 minutes long as many OSDM albums can sometimes be. By keeping their track selection to just seven and ensuring the quality is as good as it can be, they maximise the potential interest new fans will have to their future material. This is after all, their second album; but it’s their first album in seven years. After such a time and an announcement of new material, longtime fans would be eager to see what the band have cooked up in that space between records. By keeping potential temptations at bay and not overrunning their record with material, Abyssus have ensured we will be excited for future releases as well as having this album on repeat until such a time comes round.

In conclusion, this was a great album to experience. I feel like it’s been some time since I heard a great album of OSDM and Abyssus, following a seven year absence between records, have really delivered in all the ways they wished to. By keeping their songwriting down to earth and with little superfluous elements being thrown in, the band have established a record that is actually extremely accessible to potential new fans not only to their own fanbase but to death metal on the whole. It’s a death metal record that manages to pull you in and keep you without feeling like it needs to utterly crush you into the earth to do so, it maintains a straightforward approach to death metal from start to finish and amongst an ever growing plethora of extreme metal it’s nice to hear a band choose to keep things simple and to the point. Death Revival is bound to be a success for Abyssus, longtime fans are assured to find much to enjoy here.