Originally planned for about two years ago and billed as one of the Pumpkins United shows but we all know what happens to the best laid plans of mice and men. Manchester, being the beginning of this tour, is the first-time the German legends have hit the stage since their Rock in Rio show back in the autumn of 2019 and much water has passed under the bridge since that day. Not least the release of a 2021’s self-titled album, featuring all the dramatis personae who had rekindled the Helloween frame for the past two – functioning – years.

I’m the first to admit that I am not the world’s leading authority on Power Metal but, as a veteran of all those early indoor Bloodstock Festivals I learned to appreciate the nuances and the bombast of the genre; and it is Helloween themselves, although they have only played the festival once (Open Air in 2008) that is my go-to band for all things overblown and over-stated. And who better than to support the Teutonic Titans that Sweden’s very own – and original – Power Metal machine, Hammerfall?

It had all the markings of an Epic Metal evening!

Hammerfall hit the stage early but the Academy is at near capacity as they do. It’s been a couple of years since the Swede’s themselves performed but this deep into their careers there’s no such thing as ring-rust.

Seemingly taking a leaf from the headliner’s book, Hammerfall set about leading a charge through their dozen-album discography. Glory to the Brave and The Metal Age from the debut mix perfectly with the uber-cheesy – yet tongue-in-cheek - (We Make) Sweden Rock.

The new album, Hammer of Dawn, is represented, but only briefly and, when you have such an extensive discography and nearly thirty-year’s experience under your belt, you can be sure Hammerfall know what their audience wants.

It’s something of a cliché but Hammerfall do exactly what they say on the tin and deliver an hour-plus of traditional, chest-beating, fist-pumping, singalong Heavy Metal anthems. The crowd lap it up in spades, answering the call to throw arms into the air and scream their throats raw. There is undoubtably a huge stylistic gap between Power Metal and Punk, but the genres merge in the life-affirming message of the music and, let’s face it, as ridiculous as it is sometimes, you can’t help but feel a little tingle every so often.

Although it’s not the set closer or encore, the biggest reaction from the faithful comes for Let the Hammer Fall, a song that even I recognise instantly. The Swedes are even afforded an encore, ripping out Hammer High and a just-turned-twenty Hearts on Fire from the Crimson Thunder record.

As usual, Hammerfall serve up a hearty slice of good old-fashion Power Metal and – okay, it’s not on the cutting edge of the latest trends – but a couple of thousand people showing up early doors can’t all be wrong. Shame most of their merchandise went awry on the way up North as they would have made a killing.

Another cliché you could use about tonight’s show is: every cloud has a silver lining; so, although we won’t be seeing the full, three-hour, Pumpkins United show we do get the two-hour-plus version – and with Hammerfall on the bill too – the Academy is winning at life tonight.

When Michael Kiske announces this is Helloween’s first time back in Manchester since the Keeper, Part II tour and the recording of the Live in the UK record, it really starts to put time into some perspective. Helloween was the first band I saw on a festival stage – opening the 1988 Monsters of Rock show – which possibly accounts for my love of the band – and to hear Kiske and Hansen belting out those old favourites and bone fide classic Metal songs like Eagle Fly Free, Future World and Dr Stein is a pure nostalgia trip.

Ride the Sky and the whole of the second side of Walls of Jericho get aired and you forget that the band started way back as a Speed Metal act. Kai takes over lead vocals for this medley and the video screen at the rear of the stage runs animated clips. The variation on the pumpkin theme throughout the evening starts to inspire me for Halloween; with less than six months to go, you’ve got you get your plans in order.

Michael makes a comment about the lockdown weight he gained and, looking at YouTube footage of the Donington show I don’t imagine he’s going to be fitting into those trousers anytime soon – feeling your pain with that, Mr K – for, back then I, too, was as thin as a racing snake!

Kiske was replaced by Andi Deris for 1994’s Master of the Rings which was seen as a return to form after the critical and commercial mauling experienced by both Pink Bubbles Go Ape and Chameleon and Deris remained as Helloween’s only lead singer up to 2015’s My God Given Right.

It’s fitting then that Deris takes the role of lead vocals on the majority of post-Chameleon songs: Where the Rain Grows, from his debut, Straight Out of Hell is dusted off after six-years and Power from 1996’s The Time of the Oath feel more polished and refined when compared to the likes of Heavy Metal (Is the Law).

But, of course, Helloween are also looking to the future with a new album on the shelves, so Helloween (the record) is represented through Best Times, Mass Pollution and, cleverly Skyfall, which is split between being the set opener and the set closer.

We’re taken back in time for the encore and the track Keeper of the Seven Keys – I personally would have preferred Halloween, but it was great to hear this epic again. The band leave the stage and, after more than two hours, it seems like it’s the end. But can you imagine a Helloween show without I Want Out?

The Germans, showing an uncharacteristic disregard of time, jam out the end of this track until word comes from the side of the stage that they have breached curfew and need to get off.

As we file out of the Academy you get the feeling Helloween would have played all night if they could – and Hammerfall would have joined in too. But, it had to come to an end and the smiles on virtually every face on Oxford Road suggests the night was a categorical success.

Hopefully it won’t take Helloween another thirty-some-odd-years to come back next time. I’ll be clocking on ninety by then and will probably have to think about slowing down. 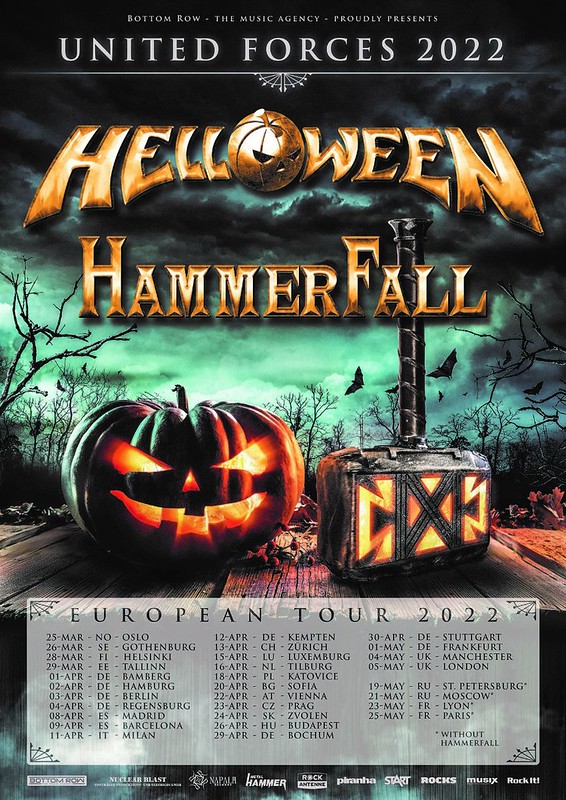