Fellow Liverpudlians Conan had a shaky start to their career, following sporadic spans of activity between 2006 and 2009 before they finally became the much more stable act we know them as today. Releasing two demos in those first years, it wouldn’t be until their 2010 EP Horseback Battle Hammer, their debut major release, where fans would at last see what the band would be reckoned for; crushing tone and dissonance. This was nothing new in doom metal at the time and yet, what Conan were doing was very different to the slew of doom acts at the time. 2012 saw the release of Monnos, soon followed on by 2014’s Blood Eagle, a huge album in its own right, before the band followed that work up with 2016’s Revengeance; each record I deeply adored one after the other. Now, another four years after their fourth album, Existential Void Guardian, Conan return with their fifth full length record: Evidence Of Immortality. I practically threw myself into this one, preparing my eardrums for the tone that was bound to come.

Their first album in four years, Conan waste zero time at subjugating you before everything you expect of the band by now, flinging us straight into the mire with a ten minute opus that possesses all the tone and crushing weight the band have become renowned for. Its structure is interesting as the band effectively bookmark the beginning and end of their record here with two massive tracks. The rest of the album is moderately paced with shorter yet, no less, punishing pieces. This additional time thrown onto the opening and closing sections of the record help to instil a sense of importance to the track running, it’s clearly been done so for specific reasons. As a result, our attention is massively heightened, we’re not going to miss a thing. With fifty minutes to work with, and these two particular tracks totalling twenty-five minutes together, a full half of their album is dedicated to this approach. It’s also good to see the band return to their longer excursions considering their previous studio release did away with the longer works. The doom element of their sound certainly feels to have resurfaced to some degree.

I can’t help but feel like Conan’s vocals come off with much sharper integrity throughout this record. By now we are fully aware of how the band approach vocals and what their style is. Admittedly, back in the day, I couldn’t help but not get it; I didn’t understand the band’s form of vocal delivery. It’s only when I read that they were akin to a chanting, to a general bellowing far-off commands that they finally made sense to me. Since then, Conan’s vocals have been a staple for the band and one of my favourite aspects of their sound. Still, it’s admirable to acknowledge how the vocals here manage to punch through the massive tone; Conan have always had to balance vocal performance with their songwriting but I feel like, in this instance, they have absolutely perfected that balance. This is the clearest and most powerful the vocals have ever felt, the most piercing and sharp they’ve ever been. 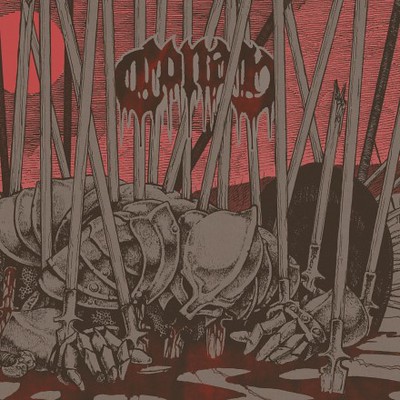 Conan have always marked their identity with an insistent attention to tone and power. Evidence Of Immortality is absolutely nothing new in regards to this approach, but what feels different this time round is how their power is being utilised. It doesn’t feel like their assault is hitting a cinderblock all the time where the power disperses quickly after a massive jolt of adrenaline; in this case the strength of their songwriting and riffs feels spongy. The impact they deliver is still likened to a point blank detonation, but it feels purified owing to how the power encapsulates your being as opposed to striking you head on. It’s a serener, more enveloping but no less dominating performance where the impact of a riff or a section of songwriting will land with wider resonance, where it’ll spread out before reforming back again and continually bounce back. It’s this essence of a bouncing impact that keeps their sound alive and fearsome without you ever feeling any tonal fatigue.

For a band that merge many forms of doom and sludge metal together, I’ve always found it striking how Conan have regularly changed up their drumming styles. Their early works stuck to a pretty rudimentary approach to the drums, but as their albums kept churning and releasing the drums were continuously being expanded upon. Their 2016 record, Revengeance, gave me my first experience of a blast beat during a truly heavy doom album; that notion continues on here as a track like “Leviathan Hoax” provides examples of blast beats here and there to raise the profile of intensity the band may offer. Such examples may be brief and rather select, the band understanding how their drumming performance should be best conveyed for such a record, yet it’s great to see Conan sticking to their guns and standing out amongst a plethora of conventionally accepted drumming performances in doom metal. In addition, there are many drum fills and pieces to keep us thoroughly engaged, anticipating the next sequence of power. It’s unusual to have such active drums for a doom record, however with the malice the band exact through their tone, it helps to give some alleviating quality so we’re not being completely devastated by guitar tone solely.

In conclusion, this album is another slab of Conan might and is certainly their strongest release in several years. Their songwriting only continues to feel refined, tweaked along the way here and there to help instil this sense of power more affluently and with greater clarity. That’s the big thing here: clarity. Their power has never been in doubt, but this record truly exudes the greatest level of clarity Conan have ever subjected unto us. The fuzz is still there, a staple of their sound but it no longer feels animalistic; it’s been captured at last and leashed. Now the band can do whatever they wish, having finally balanced vocals with songwriting with tone to an elegant degree. Closing out the record with “Grief Sequence”, that 14 minute closing opus we mentioned prior, a concluding instrumental work unlike anything the band have done so before. Breaking out the synthesisers, Conan, now on their fifth full length album, still push the bar of what fans can come to expect of their ability. I’m so excited for the future of this band and all there is to come. A wondrous listen that, in spite of the crushing and trudging weight behind its mass, only finishes too soon.