I was quite surprised when I came across this EP. Come this May, I’m off to London to a one-day festival named Necropolis where bands like Undergang, Chaotian, Slimelord and more are playing; right at the bottom of the lineup we’ve got Sequestrum. Formed in 2021, Sequestrum are certainly amongst the newest arrivals in the Danish extreme metal community to burst forth and with the quality of bands that have been evidently exploding from there right now, I’m one to agree that more is truly merrier. Their first Demo, The Epitome Of Putridity, only released last year so with this EP release, Sequestrum are already looking poised to release further material down the line if this release window is anything to go by. I was firmly interested to see what this EP could deliver on, not only for my personal entertainment but, for what Sequestrum will offer when I get to see them perform live later this Spring.

I like how the EP gets things started with something that’s pretty nonsensical. We know we’re going to get something pretty macabre and putrid so it makes sense for the band to open up this EP with an audio clip that’s specifically consisting of gargling voices and snarling sounds. It ties into the band’s dark and vile sensibility, one that’s reflected by the songwriting most effectively through riffs and a pacing that doesn’t try and outpace your capacity to follow along to its trudging momentum. We can tell the band want to move with some modicum of speed as we can bang our heads in turn to their churning displays of malice but it isn’t so quick that the band are taking us for the journey, to which we have no say over. With that said, the band do know how to pick things up as they demonstrate early on in the EP’s duration, the drums manage to pierce through the band’s fastest moments as bass drums, cymbals and Tom-toms alike can still be perceived during even the most aggressive sections of Sequestrum’s onslaught.

But the most obvious element that lends to Sequestrum’s performance is the production. While the band may weave in and out of the varying intensities their performance entails, the production is far, far away from anything concerning a clean and polished aesthetic. This EP just screams dirt; you can feel it in the riffs, in the vocals and especially how such an application of grime and filth has impacted the very essence of the music herein. You can hear it in the bass as well; the bass drums and bass guitar itself is just filthy as we pick up effortlessly on the grimy undertones the band evidently wanted us to notice; and notice it we do because we can’t turn our heads away from it. It’s like watching a car crash in real time; we know it’s ruthless and morbid but there’s something primal within us that can’t look away when we know there’s disaster in the making. With that said, the guitar work is able to still feel expressed with the importance it’s been given as it is naturally the primary force Sequestrum are utilising for this release. Within the annals of danish extreme metal, Sequestrum, at the very least through tone and aesthetic, are already fitting right in. 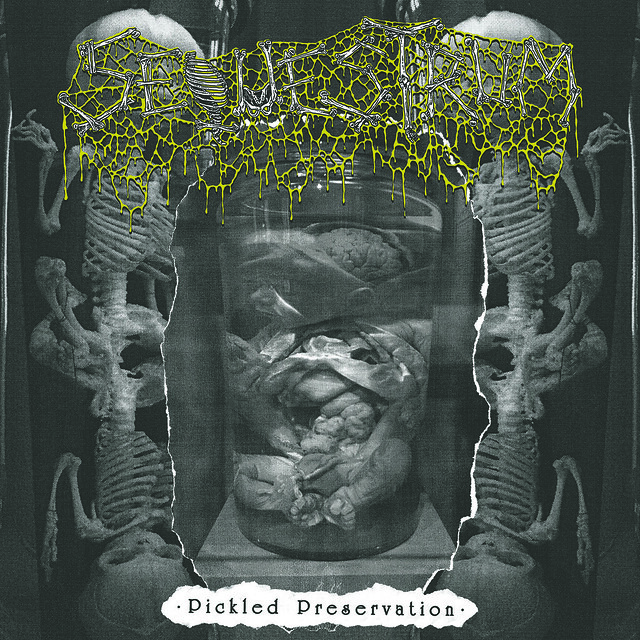 I also have to appreciate the surprising variety of track types as well. I thoroughly expected this release to compose of a few tracks to garner fans to their side and showcase what they’re capable of, but Sequestrum, on their first EP, don’t intend on letting people take them for granted. On their first EP, we get atmospheric pieces with songwriting in the second half, more conventional pieces that we’d be anticipating, and the band even have the audacity to throw in a two second track al la vie the style of grindcore. The latter of which is something I really wasn’t expecting and is probably one of the best things Sequestrum could have done; by how many will have become familiar with what may be coming up. By throwing in a few wrenches into the mix, Sequestrum ensure fans will be constantly on edge for what’s coming next because the band will, since then, have opened up possibilities fans did not see coming. It also ensures the experience isn’t too segmented, providing fans with a malleable and ever-moving EP that isn’t looking to confine itself to any singular shape for its duration.

In conclusion, it’s interesting how Sequestrum are a part of that Danish extreme metal community and yet they have already set themselves apart from many of their contemporaries. Sequestrum, through Pickled Preservation, have established their sound as one that leans much further towards the gross and more vile aspect of death metal where all things noxious and mouldy are celebrated. Their inclusion of audio samples periodically placed throughout their work also gives credence to this approach on songwriting. Owing to this aspect, there’s no way you could do a cleaner production that would justify the atmosphere they are otherwise protraying; their sound had to be one just as macabre and evil as the subject matter they cover and I personally feel they pulled this off excellently. I’m all the more interested now to see these guys play Necropolis this coming May in London, and playing beneath Slimelord, Chaotian and Undergang themselves, I reckon they’ll do just fine. I am now excitingly anticipating the news when they announce a full length release.