Its quite the atmospheric start to the new EP from Telfordian blackened death metal upstarts Blood Church. At the start of the year they had little, if any, footprint in the local music scene. They entered the Wolverhampton regional competition of Metal 2 The Masses appearing as unknown underdogs, but powering their way through to the final and only just missing out on winning overall. Its been a sharp and sudden rise for the band, one that has pleasantly taken all on lookers by surprise.

Formed in late 2018 by four friends, the bands message has always been against organised religion and how it has corrupted humanity. The outfit incorporate elaborate theatrics, corpse paint and blood into brutal live performances and their new E.P. melds all of these elements together. Starting with the 'We Are Blood Church' intro. 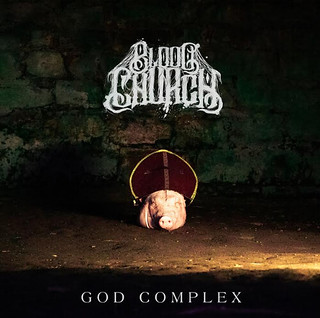 The repeating riff from the eerie intro continues through to 'Closer?' as all the other elements of the band kick in, ferocious bass lines lead into Chris Thomas's blood curdling vocals. It has the face of death metal with the feel of black metal, but undertones of something more upbeat. 'Jesus Wept' follows on, starting very much in neither genre, Chris Thomas's rumbling bass is backed up by intermittent but light guitars as a spoken word piece emanates. It's not until a minute in before the screams start, the tone gets low and the dark death metal feel kicks in, vocals deeper and darker than previous tracks, they alone heavier than that bass.

The drum work on 'Jesus Wept' is outstanding and Chris Massey is in his element, which continues into the E.P.'s final track 'False Idols'. After the sampler intro we are hit with a wall of noise, drums and guitars combining in the assault on our senses. Thomas uses the track to demonstrate his vocal range, from high death metal growls to a menacing dark metal bark.

For a young band breaking into an over crowded scene you may not expect much from their first recorded release. But Blood Church's 'God Complex' stands out from the crowd, well produced, well thought out and brilliantly written. It's not a career defining master piece, but from a young band you don't expect that. It is however a triumphant launch for an exciting new band.

Blood Church - God Complex will be available from all your usual outlets on August 30th.