Imperium Dekadenz - When We Are Forgotten
Reviewed by: Robbie Maguire

In an ultra-competitive, oversaturated and often cynical metal world where band loyalty is a distant memory it is becoming increasingly hard for artists to release original, exciting and relevant material. Material that sets them apart from their contemporaries. Occasionally, and you know when it happens, a band grabs you by the neck and takes you kicking and screaming, only for you to surrender and then emerge on the other side feeling somewhat cleansed. It's no exaggeration in saying Imperium Dekadenz achieve this with this their 6th full length album.

Opener 'When We Are Forgotten' sets the bar high with its hypnotic build up, unleashing sharp riffs fighting to take the forefront with rasping vocals and epic soundscapes over-layering the pounding drums. It all works in total harmony with the production being sympathetic to the 'classic old school roots' yet having a modern take allowing the whole mix to be clear enough to hint at the post rock sub genre that it comfortably visits. 'My Solace II' has a hypnotic undercurrent that is as beautiful as it is heart wrenching showcasing all aspects that make atmospheric black metal so powerful. 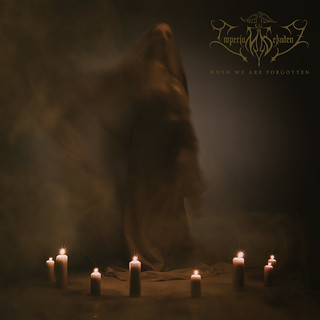 'Frozen In Time' is the highlight of a haunting album that really should be enjoyed by a wider audience. The Repetitive powerful almost 70's riff is punchy and has a spiky intensity. 'A Cave Called Wisdom' with its mid-paced meandering stomp could easily be enjoyed in isolation, dipping into independently from the rest of the album. The strength of the album however is in its collective appeal. You could fully immerse yourself in the album in its entirety where you will be rewarded most. Furious Black Metal sections deliver the intended punch but make way effortlessly for the much anticipated atmospheric parts.

Beautiful passages, acoustic sections and  epic soundscapes scatter this album. The fierce black metal can at times have a mighty depressive grip on you then all of a sudden you are beautifully uplifted out.

What Imperium Dekadenz have done is create an album that recognises and retains much of the influences and character from black metals forefathers especially the 2nd wave of Norwegian bands. They also innovatively look to the future and push the black metal boundaries with their expansive, enriching and whilst at times melancholic music. Immerse yourself in the sheer beauty of 'When We Are Forgotten' for it is ultimately a life affirming journey you will be taken on.

Imperium Dekadenz' new album 'When We Are Forgotten' is out on Napalm Records on August 30th.