It’s here, Black Star Riders are back with a new line up and a new album to boot. Ricky Warwick and Scott Gorham put the band together from then then touring line up of the legendary Thin Lizzy a number of years ago now. Three full length albums have received critical acclaim and projected the band further than either of them could imagine.

Line-up changes in recent years were finalised late last year when Damon Johnson decided to take a step back from the band. With their new line up now in place Black Star Riders deliver their new album ‘Another State of Grace’ with renewed vigour, energy and enthusiasm. Can the recording live up to the three that have come before it, or even the classic’s that Gorham has worked on over the course of his storied career? 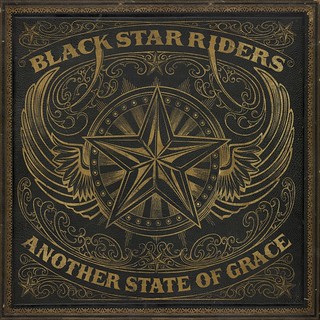 The album kicks off with the upbeat barnstormer ‘Tonight The Moonlight Let Me Down’. It’s got all that Black Star Riders feel to it, raucous and rocky with a heavy under current of Thin Lizzy's song writing influence in the back ground, especially through that chorus.

Title track ‘Another State of Grace’ is a completely different kettle of fish. It starts with the feel of a sea shanty with a modern hard rock twist. When the guitars kick in it gets louder and more direct, Warwick’s voice standing out. The sea shanty feel returns again and again throughout the song, but it’s not a bad thing. In fact it’s a unique offering showing that in their song writing they can still stretch that envelope.

The album fluctuates in tempo throughout. Fast paced rock anthems mixed with the softer touch of songs like ‘Why Do You Love Your Guns’. That number in particular a wonderfully slow, acoustic number with a strong political message. Yet it strong, stands side by side with more modern rock songs full of speed and energy like ‘Ain’t The End of The World’.

‘Underneath the Afterglow’ stands out, Warwick and Gorham at their song writing best. Dual guitars raging, adding depth and feeling all topped with Warwick’s luscious vocals.

The album builds on the legacy of Gorman’s past works. Adding the direction and elements that Black Star Riders have brought to the table over their own releases and delivers the defining next step in their career. ‘Another State of Grace’ is an album from a rock act at the top of their game and with the potential to keep delivering for years to come.