Porn’s new album is the third act in a trilogy. The first act; 'The Ogre Inside - Act I' is based on the character Mr Strangler. The second was released in 2019 and was named 'The Darkest of Human Desires - Act II', and this is 'No Monsters In Gods Eyes - Act III' which concludes the trilogy.

The first act deals with the inner struggle of the human race, dark desires and the oppression of your will. It is suggesting that you should release the Ogre within and embrace your true self. Thus giving birth to Mr Strangler himself. The second act tells of Mr Strangler carrying out murder and massacres as he is now the embodiment of his true self. He also wishes to invite the listener to join him in the darkest desires of murder and bolster the ranks of his death club. 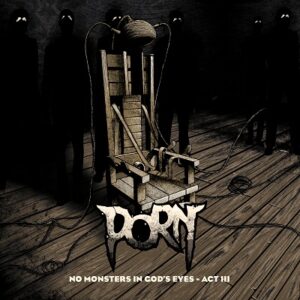 This third act see’s this story come to an end with Mr Stranger facing punishment for his crimes. His punishment is death and this is his dialogue with his death. He is still requesting the listener to carry on his work as “this is the work of God, because if God exists everything is his. And even the worst monsters are the children of God. There is no monsters in Gods eyes.”

Porn are a French Gothic rock band and their music is a mix of Marilyn Manson, Sisters of Mercy and Depeche Mode. The subject matter of their music is dark and nasty; their music is not. This album is produced by legendary producer Tom Baker, who’s has worked with similar bands such as NIN, Ministry, Marilyn Manson and many many others. His legendary status is well deserved as this type of industrial rock pop needs a nice warm sound; the sound is exactly that. I have never heard the term “Murder Rock” to describe a genre, but it does fit. If the subject matter is murder then murder rock it is.