To those unfamiliar with Occult Rock, it may be viewed as one of the lesser celebrated of the many sub-genres within heavy music. However, those who follow the dark paths that it creates will wholeheartedly extol the virtues of its wicked, captivating and surprisingly uplifting aspects. So, if you are one of the many who have only really peered from the edge, unsure and afraid to dive in fully to the devilish waters then read on...

On 'Novis Orbis Terrarum Ordinis' the band serve up a feast of fuzzy hard metal with a heavy dose of 70's infused groove. It is indeed heavy enough to keep metal fans interested whilst throwing delightful melodies into the mix all over the place. Subtle shades of differing moods are evident but cleverly change so often. There is to me anyway, an underlying feeling of hope not despair despite lyrically the album at times delving into darker subject matter. 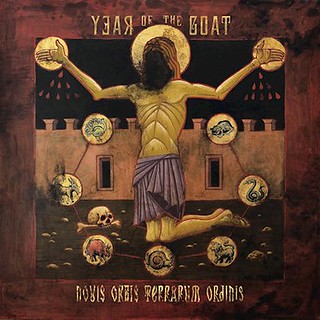 Well written occult rock doesn't have to be listened to (cliché I know) surrounded by candles, in a darkened room, to try and create an atmosphere. However if that's how you want to listen to your music then why not. The arrangements, individual musicianship and lyrics all combine and the result is that Year of the Goat have created an album stuffed full of atmosphere, unearthly imagery and beauty.

'Ira' begins with a sumptuous, warm guitar, a small echo adding to the feeling of fragility. The bluesy vulnerability continues, space being afforded to allow the individuality of the parts all shine yet merge effortlessly. The vocals are warming and soulful. Dizzying lead work keeps popping up all over the place. In fact one of the many highlights is the sublime guitar. The visceral hard rock riffs contrast with the delicate playing where Year of the Goat cleverly know when playing less can be so much more powerful and convey more feeling. Highlights litter this album from the driving space rock of 'Superbia' to the potential mainstream gatecrashing 'Gula'. Despite English not being their native tongue the lyrics are excellent and really create a picture for the listener, a key factor in good occult rock.

In epic album closer, the trippy 60/70's trippy 'Subicio' they have saved the best till last. The bewitching female vocal at the fore, then duetting wonderfully with the male singer creates an alluring feeling. Melodies pop up all over the place musically and vocally. There is none more apt way to bring the album to a stunningly beautiful triumph climax.

Often as I have been listening to this I find myself wandering who certain parts sound like. I have not come up with one band or artist that I can legitimately say this sounds like. It obviously has many styles influencing it but ultimately the bands originality is a key strength and overriding highlight of the whole album. This album extends beyond psychedelic, hard rock or occult metal. It should be appreciated by old and young be they new to the heavy music or seasoned veterans of the riff. If you can afford yourself the luxury of experiencing this album without distraction, in its entirety, then the rewards will be great. It is a masterful marriage of dark and light. Still unsure of Occult Rock / Metal? If you are on the edge peering in, jump in, the dark waters welcome you!