1349 have never been a band to rest on their laurels and every release, from the low-fi debut, Liberation in 2003, through the polished big-league introduction of Hellfire of 2005 to the divisive Revelation of the Black Flame, it was always a given that a new 1349 album would not be a rehashing of the one that had gone before. Even the slightly underwhelming Massive Cauldron of Chaos tried to move away from the sound of Demonoir.

And the same can be said for The Infernal Pathway with its return to the fire and bluster of the earlier releases but with the honing and precision of a band seasoned from years on the road. 1349 is not trying to reinvent the wheel with this release or to take their music into the left-field in the way they did with Revelation of the Black Flame. Rather, The Infernal Pathway feels like the work of mature, dare I say: Elder-Statesmen, of the scene. 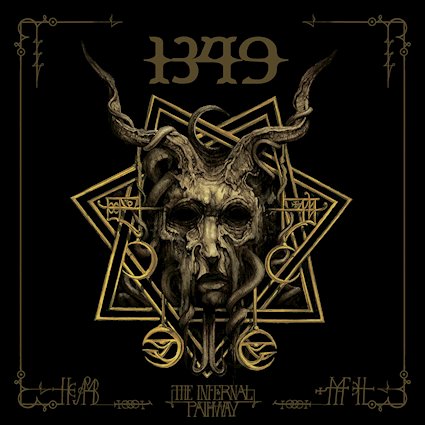 The likes of Through Eyes of Stone, Enter the Cold Void Dreaming and Striding the Chasm still bristle with the bile of the 1349 of old; Frost lays down the kind of barrage usually heard in arenas of conflict and since the departure of Tjalve to Pantheon I, Archaon has embraced the responsibility of delivering some filth riffs. But it is Ravn’s sepulchral rasps which sets 1349 apart as, while many have the technique, Ravn vocal lines have been consistent across the band’s career. Even on the seemingly more sedate tracks, Dødskamp or the more sluggish Stand Tall in Fire, with its clear Satryicon influence, 1349 still manage to create a Diabolical invocation.

Although The Infernal Pathway may not as ground-breaking as some of the previous works it is a 1349 album from start to finish and that means it’s a nasty collection of high quality Norwegian Black Metal delivered by one of the scene’s most accomplished bands.