So you've got a Death Metal band that has been creating much anticipation and excitement within the extreme music world. You've got the pedigree and experience within said world to more than justify the rabid interest. So what now? You simply drop a monster of a debut album that will surely stun and entertain in equal measure. This is what Strigoi have achieved with 'Abandon All Faith'.

Formed from the ashes of Vallanfyre, Strigoi features ex members Gregor Mackintosh and Chris Casket (Paradise Lost and Extreme Noise Terror respectively). It is no surprise then that 'Abandon All Faith' certainly showcases aspects and traits of the members other bands but expertly fuses them to create a uniquely individual sound.

Strigoi eases the listener in slowly with the nervy, unhinged menace of 'The Rising Horde'. Immediately dropping you into the depths of a very dark, foreboding place where the imminent grim reality of what is to follow quickly dawns upon you. Grim indeed it is. 'Phantoms' is snarling, nasty, tortuous song that begins with a sinister guitar in the fore only to be joined by vicious blast beats which supplement the assault and add to the threatening atmosphere. An eerie darkened guitar motif swirls around and ensures the menace is maintained. 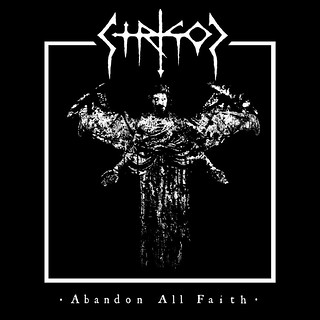 Within just a few songs it becomes clear that 'Abandon All Faith' is a very strong record. The blackened death metal is awash with originality and has its own unique style. There is the marauding technicity of the Floridian pioneers, the D-Beat punkiness of British Crust and Grind and the 'Death n' Roll' swagger and sharp riffing of the Scandinavian forefathers. All the influences Strigoi encompass in their sound are cleverly crafted together to create a unique take on a genre that is all to often overcrowded with unoriginal copycat bands. You will find yourself clamouring to revisit parts of songs, individual performances or collective offerings. 'Seven Crowns' is a highlight among so many. The devilishly evil, yet far from over the top vocals add a harshness and are a powerful addition to the bands armoury. The fact that you can understand what is being said is a welcoming feature and allows the clever grim lyrics to come through and bolster the darkness of the record. The ingenious tempo change midway through is an example of songwriters confident in their craft and willing to take risks within a field that all too often risks are not attempted.

By the time you reach 'Carved Into Stone' midway through you'd be forgiven for being thankful for the respite from the sonic battering that has gone before. However, with the intensity and rage diminished the huge punishing doomy slowed down chords mean the ears, mind and body continue to be pulverised. Long, unpleasant, drawn out screams break up the relentless pummeling. This is heavy in the true sense of the word. The sluggish, hellish racket continues with industrial tinged first part of 'Parasite' giving way to a sharp stab of crusty brutal death metal. At this point it becomes clear how varied this album is. Yes, it sits comfortably within death metal but is not shackled by the rigid confines of the genre. Blast beats are not necessarily the flavour of the day and the array of differing rhythms and tempos drum wise are the backbone of the album. They are not overpowering and sit perfectly within the mix. A mix and production that sympathetically recognises the need to create a modern sound yet respects the aesthetics of the classic death metal sound. In doing so the contrasts of the rawness and polished aspects are highlighted but allows the primal strength of the record to be accentuated.

If you like your death metal to the point yet also having enough variety that a detour in speed is a welcome change then this is for you. The buzzing, cutting chords of 'Iniquitous Rage' are a great example of this. Uplifting swirling lead work shine on this nasty, snotty rager of a song. It's an example of the brutally clever song writing that scatters the album.

To find an album that grips the attention whilst listening to it can be a rare find. In a genre with many unoriginal, comfortable and tame releases it is refreshing to have an album that stands proudly as a solid, gritty and brutally heavy death metal album. 'Abandon All Faith' achieves this whilst remaining catchy and with so much going on in its short twelve song duration. A duration that means it does not outstay its welcome, far from it. Strong enough as a collection of songs that create a collective album or individually just to dip into, 'Abandon All Faith's infectious qualities will have you repeatedly returning to it. The excitement and anticipation that has courted this release will be wholly justified and (even though the members have worked together before) its even more staggering that this is a debut album. With a rich heritage in the many genres of extreme music, it is exciting times for fans of those styles in Britain at the moment and with 'Abandon All Faith' Strigoi are leading the charge.