The Gauntlet’s Dark Steel And Fire is the very first work of heavy metal that I reviewed for 2023 and, in some way, it’s quite poetic that this first record for the year isn’t some massively established band, but rather the debut album by a one-man band who has been working tirelessly throughout the New Jersey metal scene. Formed in 2019 by Ace Meggido, the individual in question got to work almost immediately by having their name and band included amongst not one, but two, Splits that appeared to have been created to bolster the bands that make up the New Jersey community. Alongside bands such as Siege Column, Blood Magic, Brutal Stone and Blasphematory, this is where The Gauntlet got its name out in the first place. Cut to 2020 and we see their first legitimate EP release with War And Guilt. But it appears time was set aside to truly make efforts on Dark Steel And Fire, The Gauntlet’s first studio record. I’m always curious when a record like this is soon unveiled and by a one-man band no less. Time to see what this project is all about.

The way that I’d describe The Gauntlet’s style of songwriting is a traditional form of heavy metal that’s been particularly blackened, yet doesn’t strive to be a fully fledged work of black metal. By this, I mean the music is still rather open to newer or younger audiences and you wouldn’t necessarily need to be an avid fan of extreme metal to get into this record. While the riffs do sport this evil sheen, they still come off as rather rudimentary and do not stand out as something more otherworldly or visceral. The name of the game is still down to earth and immersive heavy metal that we can get behind, which is all the more purported by songwriting that isn’t totally fixated on speed either. The opening track, “Where Heroes Go To Die”, sounds like it’s going to be this ripping nightmare whereas, in reality, it’s this much more contemporary piece that enables us to take in all The Gauntlet have in store for us.

But then you’ve got a track like “Beyond The Limits” that immediately follows up that steady-paced introduction, detailing to the audience that this record isn’t going to be some one-note pacing where every track will follow the prior’s example. Some tracks are going to be faster than others, they’ll be more intense than others while others may harbour steadier pacing in order for the audience to take in fully what is planned for them. It’s interesting however, as the band ramp up the intensity from time to time, that our experience of the record never lulls as a result. Whether the band play with more gradual or intense intentions, The Gauntlet always have something throughout the respective songwriting to keep us engaged regardless what the songwriting may feel like it’s going to be dominating the track length with. 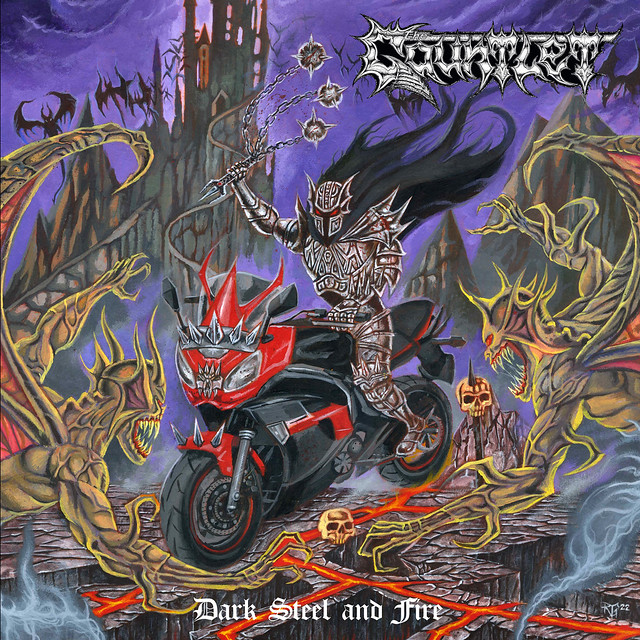 While the majority of the record is steeped in old school flair, I appreciate how The Gauntlet utilised the drums in order for the record to exude some necessary quantity of bass into their performance. While the bass can be heard to some degree during the record’s performance, I like how the drums have been produced and then mixed into the record’s bones if you will, creating the sense that the drums are providing a quality amplification of what the bass guitar may otherwise be vying to offer up. The drumming, like much of the band’s instrumental itinerary, is very old school in nature just as the album’s production on the whole also demonstrates. I think, had the production been more modern and refined, the drums herein would not have been captured as totally as Dark Steel And Fire has managed to do so. There are no blast beats or other such techniques to speak of occurring here, The Gauntlet provides drumming that is rather akin to the earliest days of black metal where it was much more primal (see DarkThrone as one such example).

One big takeaway I found with this record was how casual it was. The further you progress into this album, the more you come to understand that The Gauntlet are not here to try and champion some lost ideal or message or theory that would make them seem more “metal”. If there is any message created by Dark Steel And Fire, it’s one that says “isn’t blackened heavy metal f*****g awesome?!”. That’s it, put plain and simply. It doesn’t try and be anything other than what it is at it’s basest level, good and old fashioned heavy metal with a healthy twinge of black metal thrown in for good measure. In many ways it reminds me of what philosophies DarkThrone or Immortal seem to be play by, where their songwriting is fashioned and crafted solely for pure entertainment and entertainment only. It’s by this purpose that The Gauntlet could likely see a legion of fans returning for repeated listens, because they’ll know the band aren’t looking to preach anything. It’s simply music, where we can forget the world for 40 minutes to some blackened traditional metal.

In conclusion, The Gauntlet’s debut full length release is a triumph for the band, having released a number of Splits and an EP prior to this record. As mentioned previously, Dark Steel And Fire has no governing message or idea that it wishes to purport unto its audience, simply the songwriting and entertainment that this music can provide. In a way, we see this album revolve the more we listen to it; it can be rudimentary and typical of what a blackened heavy metal record may offer but, you then get sprinkles of moments where the songwriting becomes more bombastic, full of identity etc. The influences behind this band and record may be known to us, but to deny the outright identity The Gauntlet possess would be ignorant folly. I would certainly be interested in what The Gauntlet may have in store in coming years for Dark Steel And Fire only demonstrates that January can quite the metal month.