There are not many bands that fall into the realms of “cosmic death metal”. Astral themes have long been a theme throughout stone rock but now there are a flurry of bands bringing a harsher edge to music around the subject. Leading the charge of the purveyors if aggressive space themed music are Blood Incantation, recently signed to Century Media records and set to release ‘Hidden History of the Human Race’ this week.

‘Hidden History...’ is the bands second full length album, which follows their 2016 debut and numerous splits, E.P.’s and other smaller bodies of work. 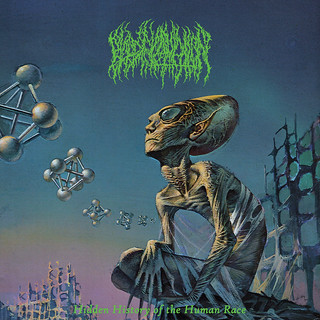 From the off the one thing that stands out as a listener is that there is a lot going on. ‘Slave Species of the Gods’ hits you in the face like a shovel. Fast and brutal from the opening notes with a multitude of different sounds. There are elements of thrash metal, death metal, black metal and a few more all in the melting pot. The song structure fluctuates between the styles leaving the listener somewhat overwhelmed. "What he just happened? What have I just listened to?"

‘The Giza Power Plant’ settles down a tad, the mixing of styles is now less pronounced. This is out and out death metal, vocally crossing the line between death and black throughout. But as a song it feels more stable than the first, it has direction and the brutality prevails.

As we progress ‘Inner Paths (To Outer Space)’ has a haunting intro, very much giving the feel of a horror-cum-sci-fi movie as the protagonist creeps slowly to their impending doom. A gentle drum beat and softly struck cymbals break through the intro building on the atmosphere now set by the song. It’s far more melodic than we’ve heard so far, the brutality of the previous tunes is all but gone and we are led down a path with verbal samples steering the direction of the story in this instrumental number. The pace rises as we pass the mid point of the song, frenetic at times the music alone does the story telling, which is a work of art in itself.

The album is just thirty six minutes long and made up of a mere four tracks. The final behemoth being ‘Awakening From the Dream of Existence to the Multidimensional Nature of Our Reality (Mirror of the Soul)’. Now let’s seem them introduce that mouthful on stage! The track is the best part of twenty minutes of the full run time of the album, immediately the brutality is back. The pace and aggression fluctuates throughout as the band tell their epic tales.

After the shock of the somewhat confused sounding opening number, Blood Incantation have managed to build a well rounded death metal album whilst weaving a story around some cosmic tales. It’s expansive, progressive and aggressive all in one thirty six minute dose. The experimentation in sound may put off the odd traditionalist or two, however with ‘Hidden History of the Human Race’ Blood Incantation have delivered a well rounded extreme metal opus.