Let’s have another prowl for upcoming death metal and, this time, with US act Blasphematory. Formed around 2018 and hailing out from New Jersey, Blasphematory aren’t exactly new to the album releasing game, having released their first album in 2019 titled Depths Of The Obscurity. However, the band have also done a few Splits with bands from the New Jersey area including Siege Column (Well worth your attention), Jaws Of Hades, Apex Winter and Altar Of Gore, so Blasphematory are very active within their local metal community and engage routinely with bands around New Jersey, which is always a good thing to see from modern acts. So here, we have The Lower Catacombs, the band’s sophomore release and one that I’ve been curious to check out, especially with that nightmarish cover art to boot as well. So, let’s see what these guys have packing for us.

If Bass was ever posed as a question, then this album is the answer. Following a very brief introduction, the album is quickly underway. But it’s the filth of the bass which will first get your attention not merely by its strength and power but, how raw and unrefined it comes across as. There’s this ever present fuzz that manages to permeate throughout the record on the whole, forever breaking through the downtuned riffs and demonic vocals to give us something additional to focus on. This is a slab of death metal that isn’t looking to be accepted on beauty points, it’s a disgusting and misshapen force that can barely be identified. Individual basslines seem to blend together as the album’s mix appears to forgo niceties altogether, enriching this sound with a malevolence and rabid flair basslines don’t usually gravitate towards. The bass here is as formidable as any crushing riff.

It’s interesting though that, despite the vast weight the band bear down on you, the more intricate and careful note playing comes off with a tinnier ambiance. Yet we shouldn’t be too surprised seeing how the drums reflect this choice too; utilising a tinny and hollowed sound that acts as a counterbalance against the band’s more concrete and dense soundscapes. For the most part the band are hurling those massive slabs down on your face which you’ll recognise as the core identity of the album, but when things are more stripped away the hollowed timbre of the guitar work makes itself known to us and it acts as a nice relief from time to time, if only to give us some breathing room. Owing to the level of bass and depth the vocals are constantly diving towards, this choice in tone was a necessary one I believe as the band’s concrete edge rarely lets up when it gets going. 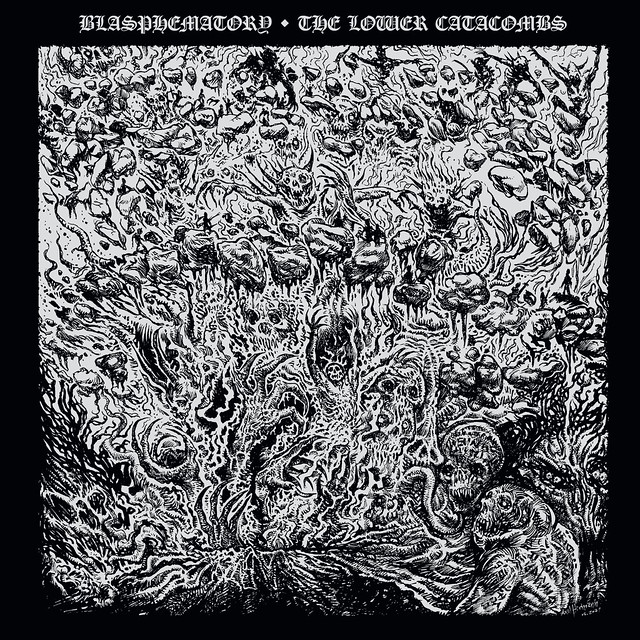 Speaking of which, the vocals here are impressively deep. While they may not move too far away from their cavernous intonations, the vocals do an exemplary job in immersing us in a depraved and darkened existence where the prospect of light has long been snuffed out. The songwriting could be moving in faster or slower speeds, and you’ll still find the vocals trundling along at the flow which their vocalist is comfortable at presenting his ability with. Vocally speaking, your experience with following this record stems from the vocals and not the instrumentation. While the riffs and drums may come and go in varying tempos, the vocals are what ground this record in our minds, acting as an anchor by which we can then enjoy everything else about this record because we’ve got at least one unmoving and absolute element about this band that has a clearly defined sound and doesn’t possess any additional fuzz to its performance.

For the most part this is a death metal record through and through, but there are segments and particular tracks where their doom element comes into the picture in a grander way. When this does occur, the songwriting doesn’t just immediately slow down to let those doom vibes flow through the music. Instead, the band accommodate for doom by tying it into the crux of their songwriting for what respective song you may be listening to. Since their sound is extremely cavernous already it can be tricky making out when the doom is really enforced, but it’s subtle and is nicely noticeable. This may be through permeations in the riffs, alterations in the songwriting that create a slower and more collective assault on our senses etc. The general identity of the band is already closely tied to what people would recognise as death/doom so they needed to be clever at rolling out the doom element, and then ensure the doom metal aspect was thoroughly utilised and explored. Overall, I’d argue they’ve pulled this off pretty well as I was able to easily pinpoint when the doomy nature of their songwriting was brought into the fray.

In conclusion, I found this record to be a pretty roaring ride. It’s a rather two-dimensional listen, by which Blasphematory are not offering anything you haven’t heard before. You’ll have an idea precisely what the band will offer you before you start The Lower Catacombs and that’s what you get in turn, but towards the back end of the record the band definitely began opening up and brought in additional things that kept things lively and engaging. The implementation of funeral bells, more diverse songwriting and pacing etc really helped the band’s standing in my mind so they won’t be leaving me just yet. All in all, this record has a very firm and established sound that it doesn’t shirk from often, but Blasphematory do enough to make the experience fully worthwhile throughout the 37 minute ride. Despairing and formidable.