Album Review: Blaze of Perdition - The Harrowing of Hearts
Reviewed by Paul Hutchings

Three years after ‘Conscious Darkness’, Polish black metallers Blaze of Perdition return with a ferocious fifth album which continues to explore the same darkness as its predecessor. The Poles, who overcame tragedy in 2013 have been relatively prolific, with three albums since 2015. Combining elements of black metal with dark rock and post punk, the album opens with the savage ‘Suffering Made Bliss’, nine seconds short of eight minutes and dripping with intensity. The roaring vocals of Sonneillon dominate, his growls deep enough to rattle the bowels of the earth. Sonic riffs combine with thunderous blast beats. Guitarist and main force behind the band XC11 demonstrates deft touches in the subtle introduction to ‘With Madman’s Faith’, which burns slowly, the inevitable crescendo launched swiftly and with blitzkrieg like efficiency. The guitar work echoes, tremolo riffing driving the track forward, underlying synths adding depth.  Having started lyrically with the traditional focus on the occult, satanism and luciferianism, Blaze of Perdition have evolved and lyrical themes are now mostly connected to general spirituality, with a focus on the shadow side of our psyche, drenched in some sort of existential, perhaps even social commentary on the world around us 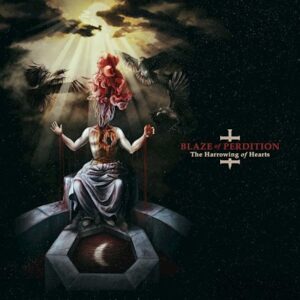 ‘Transmution of Sins’ explodes next, the haunting resonation underpins a vibrant, racing song. The black metal feel here combines with the gothic edge which the band have crossed into with regular forays in recent times. Latest drummer DQ (Michal Kowal) proves an able recruit, his assault on the kit capable of switching from blistering blast beats to less frenetic delivery in milliseconds. The duel guitar work of XCII and fellow shredder M.R combines neatly, scorching lead work supported by more savage rhythm.

If there is a standout track then it may well be ‘Królestwo Niebieskie’, which according to Sonneillon "is a hymn to our darkest human nature, the unconscious need for rejection of moral norms and proud work towards letting our passions roam free in the face of the unknown, maybe even in the face of damnation. Very Dionysian on one hand, but with a hint of doubt and hesitation as well."

‘What Christ Has Kept Apart’ maintains the momentum, displaying a genuine retention of the roots of the band whilst exploring much wider variations of style.  Those with a much greater knowledge of the Polish black metal scene will be able to distinguish the differences in bands such as Blaze of Perdition, MGLA and even Behemoth. On ‘The Harrowing of Hearts’ Blaze of Perdition move a step further away from their orthodox black metal beginnings, whilst retaining many of the traits from those early albums. With lengthy tracks the band can expand and develop each composition, with penultimate song ‘The Great Seducer’ not far shy of ten minutes expanding and contracting as it races towards a heady conclusion. The intricate arrangements allow pause, opportunity to absorb and consume all that goes before. ‘The Great Seducer’ provides opportunity for the band to reach out musically, the lead breaks almost bluesy in feel. Closing with homage to one of the band’s great influences, ‘Moonchild’ is a scorching version of The Fields of the Nephilim classic, a track that had me scrambling to my back catalogue. The jangling gothic guitar work captured spectacularly.It’s a fitting end to an album that will take months to really seep into the conscious. Now on Metal Blade, Blaze of Perdition once again worked with the same producer and have drafted in Izabela Grabda for some stunning artwork to complete this impressive package.