Album Review: Necrowretch - To Ones From Hell
Reviewed by Neil Bolton

First of all, that’s a magnificent album cover, you are left in no doubt what kind of metal you are about to encounter on this record. Conceived and produced by Stefan Thanneur. This art needs to be mentioned and applauded. And possibly feared.

French black/death metal band Necrowretch have not messed about when it came to artwork and they certainly have not messed about when it comes to music.
A band who have been in existence for over ten years are hoping to offer what they say is a brand new chapter.  For this album Vlad, guitarist, vocalist and main writing force for the band went over to Istanbul in search of a new environment to summon up the evil laid down on this recording. The band then came together as a three piece to record this monster in February 2019. It was recorded in Brussels with “Phorgath” working as producer and then Alan Douches mastering this beast in New York. What they have collaboratively come up with is in their words “Pure Satanic Death Metal”.  I am not in anyway about to argue. 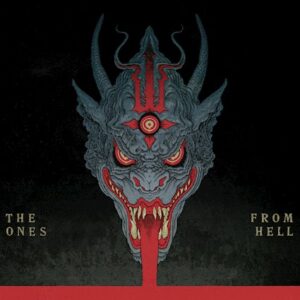 This thirty seven minute album begins with 'Pure Hell Fire'. A track opening with an acoustic guitar leading into a metal opening statement sound, already summoning the Devil. Torturous screams, blast beats and pure heaven (hell really) is just around the corner. Fast, aggressive, raw and loud this track sets the standard for the album. A standard that is maintained. 'Luciferian Sovranty' speeds up more chaotically and angrily ripping your speakers to shreds. Track three, the title track has already got me moving to the window to check if Baphomet has appeared on the garden. Not yet, but we are only three songs in. This track is hostile and raw and contains drumming precise and brutal.

Ilmar on the kit must have offered more than his soul to display these skills. He is a man possessed. 'Absolute Evil' is an instrumental and has a slight N.W.O.B.H.M. Venom sound.  Then 'Codex Obscuritas' starts with an ominous intro sticking with the traditional metal sound, Vlad, preaches his Satanic rites with bile and horror.
'Darkness Supreme' is dark and metal. Once more speeding up to a blur of violence. Again acoustic guitars from Wence create an atmosphere before the metal begins in 'Through The Black Abyss', another instrumental piece. 'Necrowretch' the final track returns to the black metal we have enjoyed, beating the listener into worship and praise for a band totally on top of their craft.

Although this album sounds new and refreshing it also sounds classic and familiar, I say that with admiration as I expect this is a difficult thing to achieve.
Ave Satanas, Ave Necrowretch!