Varg Vikernes, possibly the most notorious name in black metal if not in metal overall, from his infamous church burning in the 1990s to his rather unorthodox views on the world that he posted for everyone to see on youtube and of course the killing of fellow band mate Euronymous.

It is safe to say he is notorious, but for all the wrong reasons. However besides his time in Mayhem he also has his own side project Burzum. Originally black metal band but in later albums changed into a more dark ambient and neo-medieval style. 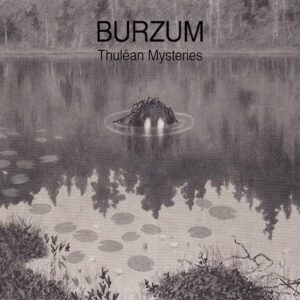 'Thulean Mysteries' is a compilation album featuring the latter part of Burzum’s career. This 23 track compilation album is honestly not my cup of tea, despite having listening to the album countless times since first getting it for review. I also think I'm a bit unbiased because whilst I am  a fan of some of the dark ambient tunes I'm not of any of his neo-medieval work has ever appealed to me. I would recommend this album only if you enjoyed his dark ambient works or for curiosity, maybe you can find something within the album that i didn’t?

Overall I would say the reason I didn't enjoy the compilation is because the it is very slow moving and at times hard to follow with the way they have setup the track listing, some times its is very gloomy but is then followed by a neo-medieval track in which Varg is chanting and singing.

Despite it not being new music I do feel that this was a rather pointless compilation as it does not highlight the best that Burzum has to offer, although I do enjoy some of his dark ambient stuff i feel that none of this was highlighted on the album.