Starting with the roar of a motorbike and blues infused guitars this is probably not what you expect from an album released by Nergal, front man of black metal legend’s Behemoth. But his ‘Me and That Man’ project is something very different from the "norm". ‘New Man, New Songs, Same Shit, Vol. 1’ is Me And That Man’s second release as an outfit and shows that despite band members backgrounds they are more musically versatile than the average man on the street would expect.

‘Run With The Devil’ is an upbeat blues driven number launching the recording off nicely, an easy way in to what is about to come. ‘Coming Home’ follows suit with its catchy riff and dark but soothing southern feel oozing through. The drum and bass line is simplistic, the guitars mellow and the vocals on each track drive the sound. ‘Burning Churches’ has strong lyrical content as the title alludes to. Featuring Mat McNerney the song keeps the dark blues atmosphere of the album going, its sound like something out of a Tarintino styled Western movie. 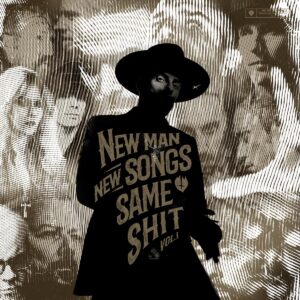 As the album progresses, so does its sound; ‘By The River’ seemingly lifted directly off a Nick Cave and the Bad Seeds album. Featuring Ihsahn, the song is dark and dank, slow moving but purposeful in delivery. ‘Man of the Cross’ has a pounding, almost anthemic feel to it with religious undertones on its lyrical content.

Whilst every song features guest musicians, it's ‘How Come?’ that stands out with Corey Taylor (Slipknot), Rob Caggiano (Volbeat) and Brent Hinds (Mastodon). Despite the monolithic lineup of musicians on the song, its direction stays in line with that of the rest of the album. Corey Taylor’s voice adding a gravely depth to the song whilst Brent and Rob show their technical range goes far further than just the out and out heavy!

From a blues perspective, this album is a dark gritty affair, dealing with some tough subjects and delivering a recording full of passion, anger and at times warmth. If you’re coming to this from the perspective of a Behemoth fan this may be a little off the spectrum you are used to. But approaching it with an open mind clears the path for a whole new world of musical story telling.