In these times of streaming and downloading music being not only convenient but lets face it cheap, encouraging people to part with a small amount of money for a double CD might prove a challenge. The task though might be made considerably easier when said CD is made up of 26 tracks from the best up and coming (and indeed established) thrash metal bands that England, Scotland and Wales has to offer. However, the challenge will surely be completed and the thrash deal sealed when the CD in question has been compiled to raise much needed funds to fight the ongoing homelessness situation. Not only is awareness raised but in buying this people are allowing Shelter to continue their commitment to supporting and fighting this massive nationwide problem.

The brainchild of UK Thrashers main-man Neil Brannigan-Fuller, 'Moshin' the Roof On' evolved after he would see many homeless people on the streets after gigs. Surely there was something he could do? He thought. With a groundswell of support and interest from bands and enlisting the superb skills of Very Metal Art's Andy Pilkington to design the striking and thought provoking artwork, the project soon developed into a thundering thrash metal juggernaut. The juggernaut has now parked so lets see what thrash delights its got inside... 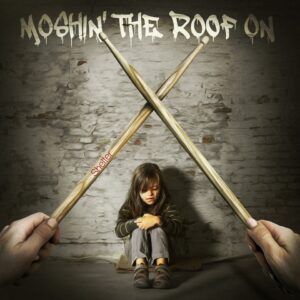 Opening up the are Chesterfields Thrashsquatch dishing up a short sharp blast of pummelling thrash with more than a hint of crossover thrown in. Brand new track 'Head Transplant' may only be a minute in length but it's a nasty little rager that kicks the thrash party off in an explosive manner. The catchiness of 'Force of Habit' by Novichok is infectious. Rarely pausing for breath, the Geordies heads down thunderous battery packs a solid punch to both ears. The dizzying lead work doffing a respectful nod to the classic U.S. thrash sound with a classy dose of N.W.O.B.H.M sneaking in. There must be something in the water, air or beer up in the North East of England as Sin Theta continue to proudly fly the flag high for Newcastle, 'Obselescence' is simply a commanding display of progressive technical heavy metal. The acoustic intro and warm vocal luring you in and then the hammer falls! A huge riff made even more seismic by the impassioned and engaging vocals. The mid paced brilliance, oozes class and is a welcome fresh take on the classic thrash sound.

The intensity is ramped up with the blackened thrash of Elyrean with their electrifying energy and drive its easy to see why these guys are one of the most talked about bands on the exciting UK thrash scene. The eight min epic takes you kicking and screaming, in a good way, on a whistle-stop of what the key elements are to a writing a well crafted and expertly played thrash metal song. The brute of a song from Northampton's Siderian in 'Origins' is a sudden blast where quite simply the hellish noise batters you! Its face ripping intensity is its strongpoint and nasty, gnarly thrash when done like this shows how primal and evil thrash metal can be.

In compiling this CD UK Thrashers (Neil to his friends) have secured a few exclusive songs from bands. 'Raven's Wing' from Obzidian has a hardcore twinged groove running through it whilst ensuring that foot is tapping and that head definetly banging! Theres some dirty menacing blackened undertones lurking beneath that noise providing an immediate sonic assault of the senses. In contrast the expansive and emotional nature of 'Insahallah' from Forgotten Fear that immerses you for its eight mins with its slight power metal sensilbilities is a fitting and grand way to close out the first disc.

UK Thrashers must be applauded for arranging 'Moshin...' in a way that sees it flow really well, especially considering these are 26 cuts of ranging thrash metal styles and with differing production values. Also, to review all songs on offer would simply not be practical. Rest assured all the tracks are worthy of their inclusion and highlight that across England Scotland and Wales there is a vibrant, exciting and progressive thrash metal scene. Unburier admirably kick proceedings off on disc 2 with 'Commandment' highlighting their take on the classic bay area sound. There is an infectious energy and like-ability to their gritty thrash. With a pair of Hi-Tec hightops firmly planted in 1988 they add their own character to suggest we will hear more from these guys from the west country. Another band making waves on the thrash scene are Bangover with their catchy, aggressive crossover thrash they give us 'Grand Moff Tarkin' a belligerent, punky yet technical punch in the face! The pit inducing riffs and soaring leads simply grab your attention and rightly so make an indelible mark in your brain! 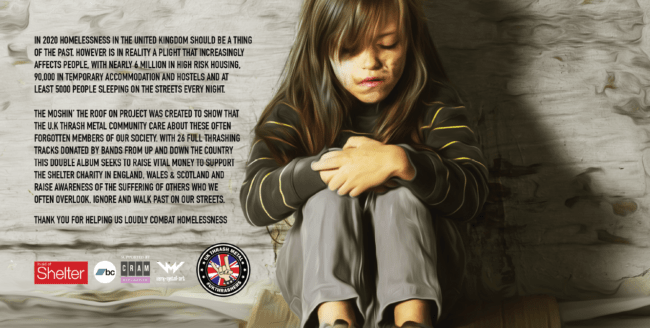 With 'The House', veterans of the scene Hydra Vein dish up a song which has an unnerving menace. Harking back to the classic thrash era but still sounding relevant today and maintaining its originality this bruiser moshes along with an eerie yet commanding and pulsating stomp. Similarly Scarred By Truth have a modern sound with a generous dose of the old school. There is a doomy undercurrent in new song 'The Plight' whilst dizzying leads dance all over the place. The thunderous rhythm section powers the track on. Echo drenched vocals add an intriguing and beguiling sense of mystique which gives the track a rightfully evil tone.

Vocals are the key factor as the raw, primal energy of 'Fractured' by Hellfekted kicks in. They are front, centre and in your face! However there is a solid slab of blackened thrash playing out a tortuous and devilish game of cat and mouse in your head. This isn't easy listening yet it has all the thrash elements that make it an intriguing and joyously macabre listen. On a different vein and with a new line up, Excursia prove that in thrash speed is not everything. 'Precious' packs a mid paced marauding punch with its captivating lead  work. There is a thunderous battery of solid chunky thrash complimented by captivating lead guitar. A catchy slab of infectious hook laden thrash. So it falls to Blood Church to finish and hopefully put the proverbial roof on this CD. In 'Jesus Wept' they have a potent mix of the disparate and harrowing which is brushed aside as their super heavy blackened death core thrash pulverises you one last time and in doing so providing a fitting end to 'Moshin the roof on'.

The metal community prides itself on its togetherness and being united. Never more so have we seen the general society at large more fractured than it is now. We in metal family now more than ever need to stand together and raise awareness of social problems such as homelessness. Supporting your local scene, going to gigs and buying merch is amazing but in buying this cd you could be saving somebody's life. Saving Lives and Thrash Metal. sounds good eh? We always knew it was special but ultimately Thrash metal is amazing and life saving.