“You don’t have to be old to be wise” sang Rob Halford, many years ago. Whilst that’s undoubtedly true, there are times when the old may just trump the new. Newcastle’s Live Burial certainly believe this is the case, with a death metal sound that spans the late 1980s and early 1990s. ‘Unending Futility’ is their second full length record and follows 2016’s debut release ‘Forced Back to Life’. 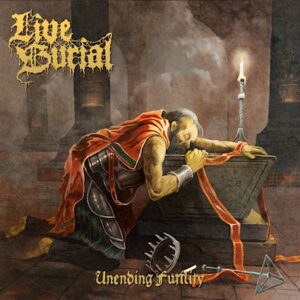 Taking in the sounds of bands such as Death, Massacre, Asphyx and even Fleshcrawl, ‘Unending Futility’ unashamedly sources those old school styles and blends them with crushing effectiveness. Ruggedly powerful passages merge with slower, skull crushing segments of heaviness. Opening with ‘Seeping Into The Earth’, the band’s twisted structures are brooding and intense, Jamie Brown’s venomous roaring explosive and echoing right to the depths. It’s even more demonic on ‘Condemned to the Boats’, which demonstrates a real old school approach.

The band, made up of guitarists Rob Hindmarsh and Richard Codling, bassist Lee Anderson and drummer Matthew Henderson continue to spread their own brand of darkness, whilst the power and thunder which descends on ‘The Crypt of Slumbering Madness’ make it a centre-piece of emotive desolation. The crashing drums and slabs of heavy riffing drag the listener back to those vibrant and fiery times. ‘Unending Futility’ concludes with a colossal number, the pulsing ‘Cemetery Fog’, which builds with unnerving power, huge riffs and slabs that crash down without warning. The doom laden opening segment allows Lee Anderson to lay down some deafening bass lines before the track explodes into full blaze. Guest vocalist Kari Kankanpaa from Finnish death doom outfit Solothus (well worth checking their new album out as well) heaves his mighty heft filled vocals into the cauldron of punishment, before an increase in groove and pace gets the head nodding in appreciation. The band have saved the best ‘til last. If you love old school death metal, Live Burial are a band you need to get to know.