There are a number of things I am looking forward to besides the ending to these strange lockdown times, the new Desert Storm album is certainly one of them. Its arrival for review is most welcome. This follow on from 2018’s 'Sentinals' has had a number of singles released to wet the appetite of fans, and finally the full release is here. Oxford’s Doom/Sludge masters have been playing sterling live gigs over the past few years, sharpening their skills and in this case their story telling skills.

The spoken word introduction of the title track 'Omens' lets you know this is not just some tunes to nod your head to. You are asked “to submit to their whims”. 'Black Bile’ was one of the afore mentioned singles to get this massive riff monster moving. Matthew Ryan’s vocals are immediately massive. This guy in my humble opinion is one of the best singers of his generation. Powerful and clear.
Throughout the album these polished sludge monsters pour grooves out of your speakers, moving and swaying to heavy riffs and thoughtful tunes. Matthew blending from singer to narrator seamlessly. 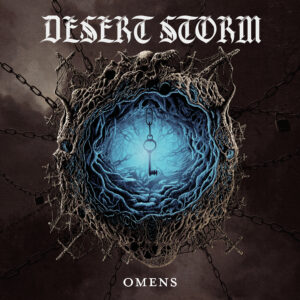 If you have ever listened to the singles from this album you will be aware of the piano bridge on 'Pain, Grief and Suffering' bringing something new to their arsenal. The two guitar players Chris White, and Ryan Cole expertly move heavy riffs to emotional breaks. Devilishly accompanied by drummer Elliot Cole and Chris Benoist on bass.

Desert Storm have become accomplished at more than just doom for a while now, and this album see’s them elevate their sound even further. Not afraid to move away from a crunchy riff and allowing to music to flow and sway in a more emotional introspective manner.
Already stand out tracks to me are 'The Path Of Most Resistance' and 'The Machine' and a stand out track in the company of these songs is no easy task. A surprising ballad completes this album, a clever folky bluesy guitar plays while Matthews perfect vocals hover above a track that would not be out of place on an 70’s Fleetwood Mac release.

This marvellous piece of work was expertly recorded and mixed by Steve “Geezer” Watkins at Wormwood , and mastered by Tim Turan at Turan Audio creating an album that will certainly survive the test of time and offer a lot of enjoyment to fans in these strange times we have at the moment.

Desert Storm release 'Omens' via APF Records on May 1st.