The American doom metal scene is in an exciting and creatively rich place at the moment. To stand out, be heard and make an impact takes some doing in a highly populated scene. For the many decent bands delivering crushing, seismic walls of sound there's the few trailblazers. The scene leaders. The ones with whom the power of the music seem to be elevated effortlessly that much more. The ones who are at the epicentre of this all immersive emotively crushing scene. Denvers Khemmis can rightfully be included in this select group of bands. Their thunderously melodic unique brand of this quake inducing metal has been slowly gaining more recognition and plaudits of late. It makes sense then on their part to not lose any of the momentum gained off the back of their last album 'Absolution' nearly two years ago. Therefore 'Doomed Heavy Metal' this six track EP serves as more than a mere stop gap until a new album sees the doomy light of day.

So how best keep fans, critics and your contemporaries interested? A cover version? Surely that might not seem the most natural choice. Especially when the choice in question is a song by one of the most revered, respected and loved voices in heavy metal. That decision is now a very bold move indeed. 'Rainbow in the Dark' is such an iconic song and the god like status given to Ronnie James Dio is wholly justified. However, Khemmis put their own stamp on the song, beefing up the verses with such a cohesive large sound yet retaining the catchiness and spark of the original. The vocal harmonies and croon like warmth of the vocals would surely make the great man proud. It is a tasteful nod of respect and after one of the many infectious listens it's clear that doom metal with all its crushing punishing and hypnotic power can also be instantly enthralling. 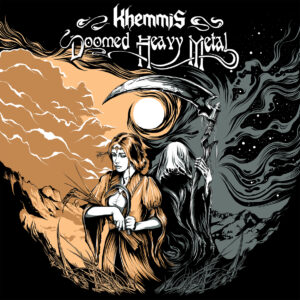 The rest of the E.P. consists of previously released songs and three live tracks. 'A conversation with Death' sees Khemmis put their own stamp on another cover (traditional American folk song, 'Oh Death'). It has a slow punishing groove and again the wonderful vocal harmonies elevate the sensitivity and splendour whilst the crushing rhythm section rumbles on. The soaring guitar leads are uplifting and rarely is a mere cymbal used to great effect. The power is heightened and the cymbal crash is an astounding mesmeric release.

The fuzzy bass intro to 'Empty Throne' is brooding whilst the dramatic crushing riffs that follow create a wall of dense heaviness. An infectious chorus and the soaring guitars allow the melancholy to be challenged giving a welcome uplifting feel. That seems to be a strong point in the Khemmis armoury. Their ability to make such heavy music Instantly accessible and wholly unique. Even with the three live tracks that are included, they are able to convey the power and emotion of their music in a live setting. The thunderous 'Three gates' from 2016's 'Hunted' (and also the prestigious Decibel magazines top album of that year) displays best the tight live unit they have become. None of their power is lost and the majesty of the music is retained. Gruff growls and clean vocals work in tandem and the emotion intended within their music is ever present.

Live music can be hit or miss in the recorded format and whilst the first three tracks are the undoubted main strength of 'Doomed Heavy Metal' Khemmis confidently show they are a force in the live setting.

Whatever the reason behind the release of this EP it will please fans thirsting for some new(ish) material. Clearly Khemmis will gain new followers with their classy cover of a classic metal staple. Ultimately in doing so not only introducing themselves and Doom metal to new ears but also the inadvertently keeping the legacy of a wonderful true heavy metal hero alive.