”Where did the violence go? Why are we letting these poser, sweet-lookin, no-inner-rage-havin’ pansy ass motherfuckers ride in on our parade?”

The full statement is shared on ACxDC’s Facebook page, aptly captioned with two laughing emojis. Whether it’s written by an internet troll, a disgruntled true metal warrior or perhaps a fan who fully grasps the tongue-in-cheek quality of the genre – it’s clear someone wants to speak to the manager.

Founded in 2003, LA power(violence)house ACxDC, short for Antichrist Demoncore, have never shied away from controversy. Whether that’s releasing logo clad iPhone cases (because apparently iPhones aren’t punk), graphic anti-religious covers (e.g. 'He Had It Coming'), or delivering unrelenting unapologetic power-violence covering topics of satanism, straight-edge and veganism mixed with a dark sense of humor, ultimately producing what are quintessential traits and topics of the band.

Six years since their self-titled full length debut album and four years after their last E.P., the California four-piece is back with a rage-filled record which shares their global and personal points of view in a pissed-off, mosh-pit inducing social commentary consisting of 15 songs totalling just over 21 minutes. 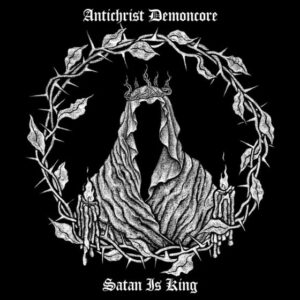 The album starts off with deafening yet harmonising guitar feedback, pick sliding right into the first song ‘Singe’ which sets the tone for what’s to come. In just 56 seconds vocalist Sergio Amalfitano shows off his incredible vocal range over the band’s eclectic brand of raw power-violence ranging from early hardcore influences, S.O.D.-esque crossover thrash to heavy grindcore chuggery. With no time to rest, ‘Mouth Breather’ and ‘Gorged’ launch you into a world of political frustration and discontent. Not trying to mask the meaning of the lyrics with pseudo-poetic euphemisms, ACxDC tells you about their worldview without any sugarcoating. Serving as a response to Kanye West’s latest release ‘Jesus Is King’ the title track ‘Satan Is King’ delivers the message of rejecting authority and rebellion without compromise. With the statement “Satan Is King” chanted six times throughout the song, over an arrangement reminiscent of early Swedish Death Metal, it’s hard to not believe it.

The sonic aggression permeates the album at a break-neck speed and the hard-hitting topics on ACxDC’s agenda are being covered one after the other. With themes ranging from unwavering police loathing in anti-cop anthem 'Copsucker', a Minor Threat ‘Out of Step’-type straight edge mindset in the thrashy heavy hitter 'Urban Blight', to queer pride in the breakdown-filled number 'Come Out Fighting', the band delivers the messages loud and clear.

Adherent to the genre, the songs are mainly fast and short, but you can also be sure to get a hefty helping of headbang friendly riffage in songs like ‘Ashes To Ashes’ which serves as a welcomed break in the power-violence fury that is ‘Satan Is King’.

The album is a dark quilt masterfully threaded with barbed wire and with an uncertain global situation unfolding in front of us, it feels right on time. ACxDC carries the flag of modern power-violence with dignity. Regardless of what the opinionated critic mentioned in the statement at the beginning of this review, ACxDC are filled with inner rage which comes across throughout the album with an undeniable assertiveness.

Satan Is King is out via Prosthetic Records the 15th of May.