Over ten years on hiatus, Atavist regrouped in 2017 and now return with their third full-length release, ‘III: Absolution’ via Candlelight Records. Four tracks of gargantuan length, the creative combination of Winterfylleth guitarist and vocalist, Chris Naughton, bassist Shane Ryan, drummer Callum Cox and vocalist Toby Bradshaw stretching just shy of an hour, and provides the listener with ample opportunity to immerse themselves in some devastating doom/sludge/drone and death metal all in one sublime blend.

Coming almost thirteen years after their highly acclaimed 2007 release, ‘II: Ruined’, this third record presents music that is otherworldly, unique, and sonically powerful. A demonstration that the band remain capable of producing uncompromising and essential music. Journeying through the depths of human emotion, Atavist take us through the opening song ‘Loss’, which explores the feeling of losing everything, before releasing the middle section of the piece, searching further feelings through ‘Struggle’, the dawning of ‘Self-Realisation’, the discovery of direction and finally the conclusion through ‘Absolution’, with the relief of completing the journey.

III: Absolution features the evocative string performances of solo artist Jo Quail on cello (Jo has also worked with many bands including Mono and My Dying Bride), as well as the exceptional talents of Bianca Blezard on Viola/Violin (Winterfylleth). With the addition of moving, atmospheric, synth landscapes from Winterfylleth/ARD keyboardist Mark Deeks, this is an eclectic yet formidable line-up. 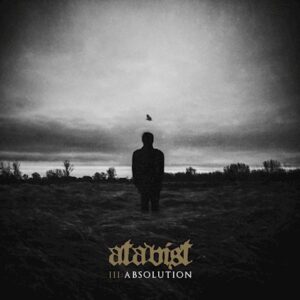 ‘Loss’ opens the album, almost 17 minutes of sheer juddering intensity. The growling roars of Bradshaw and Naughton mix with the crushingly heavy riffs and are gently coerced back to equilibrium with the ethereal strings of Quail and Blezard. Powerful in every way, ‘Loss’ provides a cinematic soundscape which would fit with rolling hills, bleak landscapes, and calm meditation in equal measures. The despair of the subject perfectly encapsulated.

By contrast, ‘Struggle’ has none of the despair, but the rolling conflict prompted by its title is amply developed. Notes arrive in glacial time frames; huge solemn slabs of doom crash down whilst the tortured vocals capture the intense challenge. ‘Struggle’ is weighty, lengthy, and horrific in its sculptured format with darkness enveloping this harrowing song. A shimmering riff opens’ Self-Realisation’, which at a mere 9:58 is by far the shortest track on the album. A brooding, muscular song, the thick riffs and pounding drumming providing massive reflection, shifting slowly and deliberately. Once more the mood created reflects the title of the track.

Concluding song ‘Absolution’ is all sweeping synths, slight dissipation of darkness, the effects imitating waves breaking on the shoreline, slowly fading to a single toned down guitar which takes centre stage, the repetitive chord structure gently echoing before being joined by bass and drums in a patiently sculpted piece which builds in intensity without ever increasing the pace, merely the feel and passion. A song of true heaviness, it’s a fitting and lengthy conclusion to an album that demands focus and attention, but which offers ample rewards for those that indulge. Recorded and produced by the legendary Chris Fielding (Primordial/Napalm Death/Winterfylleth/Electric Wizard) at Skyhammer & Foel

Studios, and mastered by James Plotkin (Khanate/Jodis/Old Lady Drivers), this album is a fine piece of work and essential to fans of this genre. III: Absolution will be released via Candlelight Records on 19th June