Bay Area metal icons MACHINE HEAD have released ‘Civil Unrest’, a 2-song digital single, featuring A-side, ‘Stop The Bleeding’ and B-side, ‘Bulletproof’, with the former featuring additional guest vocals from KILLSWITCH ENGAGE frontman, Jesse Leach. This pair of fierce protest anthems were both written days after the back-to-back murders of George Floyd and Ahmaud Arbery. They are not for the faint of heart.

The gritty performance video was directed and edited by Mike Sloat, shot on location on the streets of Oakland, CA, with Jesse’s part filmed in Kingston, NY with David Brodsky.

Vocalist / guitarist Robb Flynn shares the inspiration behind the release,

"I wrote and sang the lyrics on Wednesday May 27th 2020, the day that the four officers who murdered George Floyd were (originally) not charged with anything. This day was engulfed in protests and riots across America. I drove into Oakland, past large demonstrations already happening and in a fury wrote down everything I was feeling after watching the horrific footage. Within hours, what I wanted to say, what I needed to say had been recorded in the song.
I decided to sing it over a song called ‘Stop The Bleeding’, that we had recorded back in December. 2018 with Jared [MacEachearn, MACHINE HEAD bass guitar] and Carlos Cruz [Warbringer] on drums."

“I had been speaking with Jesse for maybe 6 months about singing on the song, as it always had a little bit of a Killswitch vibe to me. Unfortunately (or fortunately), our schedules hadn’t lined up, but with the subsequent lockdown from coronavirus, we had time to make it work. After what happened to George Floyd, I sent him the lyrics I’d written and he replied saying he was “100% on board”. Jesse is someone I consider to be a pioneer and in many ways, one of the men who changed the face of metal. His contribution to this song made it extremely powerful and it’s an honor to have him be a part of it.”

“Being asked to be part of this song is an honor. Yes, because it’s Machine Head, but more importantly, this is a message that needs to be heard and spread. These issues concerning abuses of power and racism are timeless. I have written about these previously and I’ll write about them again. I think Robb really nailed this one, both lyrically and sonically. My hope is this song helps awaken those who hear it. Robb has been a frequent voice of the voiceless in these times, so teaming up with him is a no brainer. We need more of our Metal Community to speak out on social issues and help raise awareness, especially during these crucial times. Music is the soundtrack to our lives, it transcends language and culture. This is the reason we as musicians need to do our part to spark thought and discussion on these types of issues. We can make a difference through music and we can help stop the bleeding.”

MACHINE HEAD are donating a significant portion of their streaming proceeds from ‘Stop The Bleeding’ to https://www.grassrootslaw.org/, the organization representing George Floyd, Breonna Taylor, and Ahmaud Arbery.
The B-side, ‘Bulletproof’ is a new song, also recorded with Carlos and Jared back in December 2018. Flynn adds, “The lyrics for ‘Bulletproof’ were finished in the aftermath of not only the Ahmaud Arbery murder at the hands of white supremacist, but everything twisting out of control in our World. The isolation and craziness of the pandemic, the lockdown protesters storming government buildings with AR-15‘s, as well as the blatant lies and conspiracies pouring out of our political leaders mouths, hour by hour, day after day.”
The songs needed something visually provocative as ‘sleeve artwork’, so the band looked to longtime collaborator Strephon Taylor who hand illustrated various elements from this moment in time, to make a powerful statement about America and the World.
Both tracks were produced by Robb Flynn (Machine Head, Roadrunner United, Sworn Enemy, Dress The Dead) and engineered by Zack Ohren at Sharkbite Studios in Oakland, CA, with the devastating mix being handled by long-time MACHINE HEAD collaborator and producer extraordinaire, Colin Richardson, together with Chris Clancy at Audioworks Productions UK. The tracks were mastered by Ted Jensen at Sterling Sound. 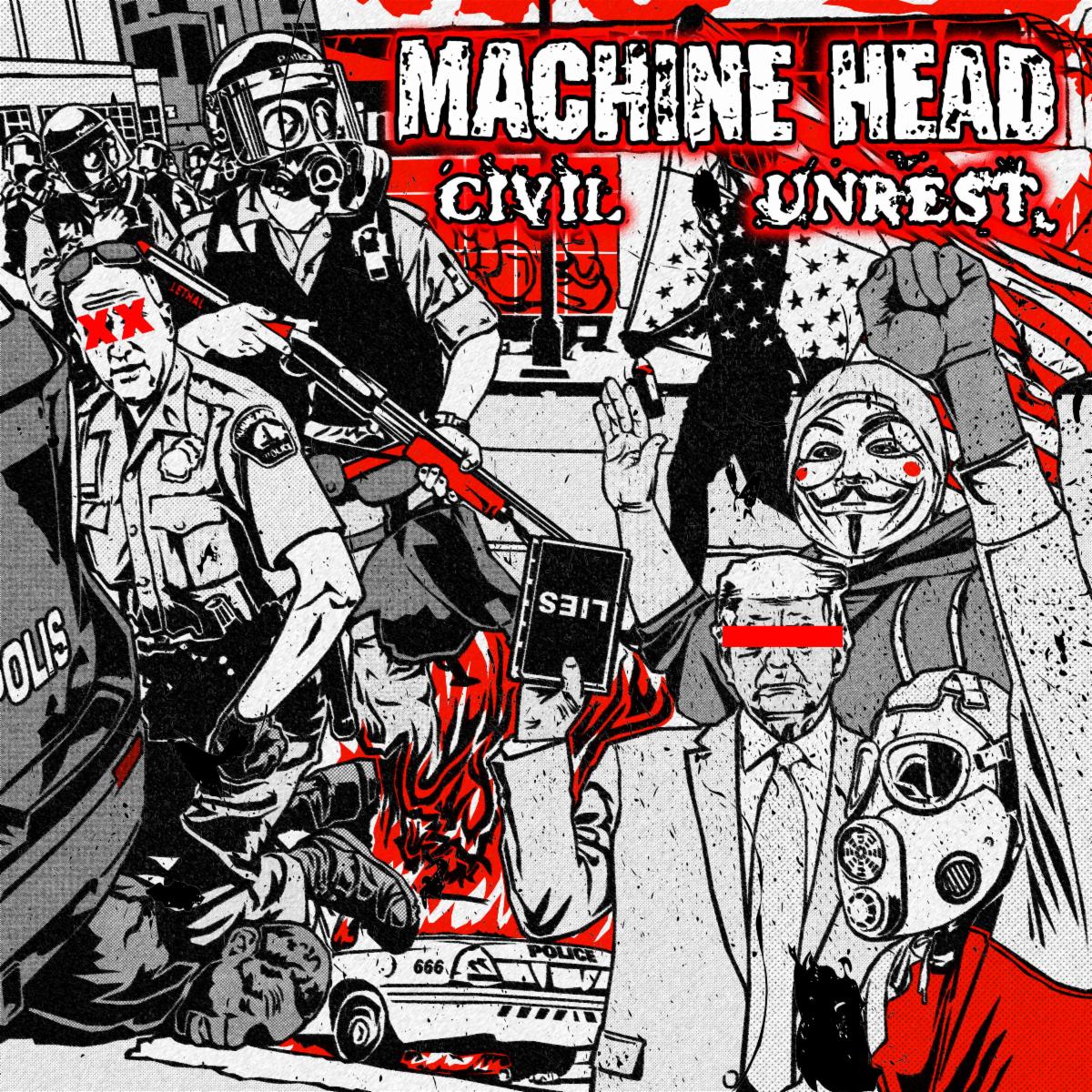