Lockdown has decimated the music scene across the globe so it’s no surprise that bands have been desperately looking for ways to maintain profiles and contact with the fans. I’ve deliberately stayed away from live streams and lockdown events in the main, there hasn’t been the feeling or emotion without a crowd. American deathcore outfit Suicide Silence hit upon an original idea, delivering a 39-date virtual tour with separate shows for different countries. Fans paid a small fee to access the stream which provided 90 minutes of live music, chat, and Q&A with the option to purchase exclusive merchandise. A neat enough idea, and one that might just keep the band afloat with all other income streams strangled.

I’ll be honest. My stream wasn’t good. Frozen screens and juddering connection didn’t help so after the live stream I gave up in technological frustration. What we did get was an hour of face melting deathcore which the band has delivered since their inception in 2002. With six albums under their belt, choosing a mere ten songs was a challenge so they wisely spread their choices from across their catalogue including two from 2019’s ‘Become the Hunter’. Viewers sampled some promo material before attention focused on the five members of the band. Spread across a studio at ‘unnamed location’, drummer Alex Lopez counted them into a raging ‘Unanswered’, which began proceedings. Minimal lighting and several fixed camera points along with the fact that the four outfield members of the band were rooted to their own two metre zones gave this an artificial appearance, which of course it was. Regardless, the band raced through the opener before track two ‘Disengage’ from ‘No Time to Bleed’ followed.

I’m not a big fan of this style of metal but there can be no denying that despite the unusual circumstances they were determined to put on the best show possible. Ample opportunity for headbanging and gurning, guitarists Chris Gaza and Mark Heylmun aped it up to the max, shredding at a blistering pace. Vocalist Herman Hermida strived to achieve a rapport with the camera, and his endearing interactions brought a smile to the face. His encouragement as the band launched into ‘Hands of A Killer’ to “circle pit round your grandma, high five her on every pass” hysterical.

If you’ve never heard this band, let’s just say they will peel the paper from your walls. Hermida’s vocals are a series of brutal grunts and roars, with the occasional clean delivery which takes you by surprise when it appears. Alongside that, Suicide Silence are intense and explosively heavy. Massive riffs, huge time changes and multiple complex patterns are too often masked by their sheer power and aggression. It was clear that this was like watching a caged tiger chase raw meat, the restraints that the band were operating under obviously restricting movement and their usual fluid on stage style. Interspersed between the live segments were a series of skits and spoof adverts for items such as ‘Death Metal Detergents’ set in a launderette and Herman’s ‘Brutal Thoughts’, a mellow section with an anything but mellow content.

I had the chat disabled but the band were running a poll to choose one of the tracks to play and it was ‘Bludgeoned to Death’ which took the prize. Closing with ‘Hold Me Up, Hold Me Down’, this was an exercise that didn’t quite achieve what it intended. If I’d been a big fan it might have appealed more, but whilst the band put their heart into this, it was evident that like most of our bands, Suicide Silence desperately need an audience to feed off in the live arena. An admirable attempt which didn’t quite hit the heights of a real live show.

Setlist:
Unanswered
Disengage
Meltdown
Two Steps
You Only Live Once
Hands of A Killer
Wake Up
Cease to Exist
Bludgeoned to Death (Fan vote vs Love Me to Death)
Hold Me Up, Hold Me Down 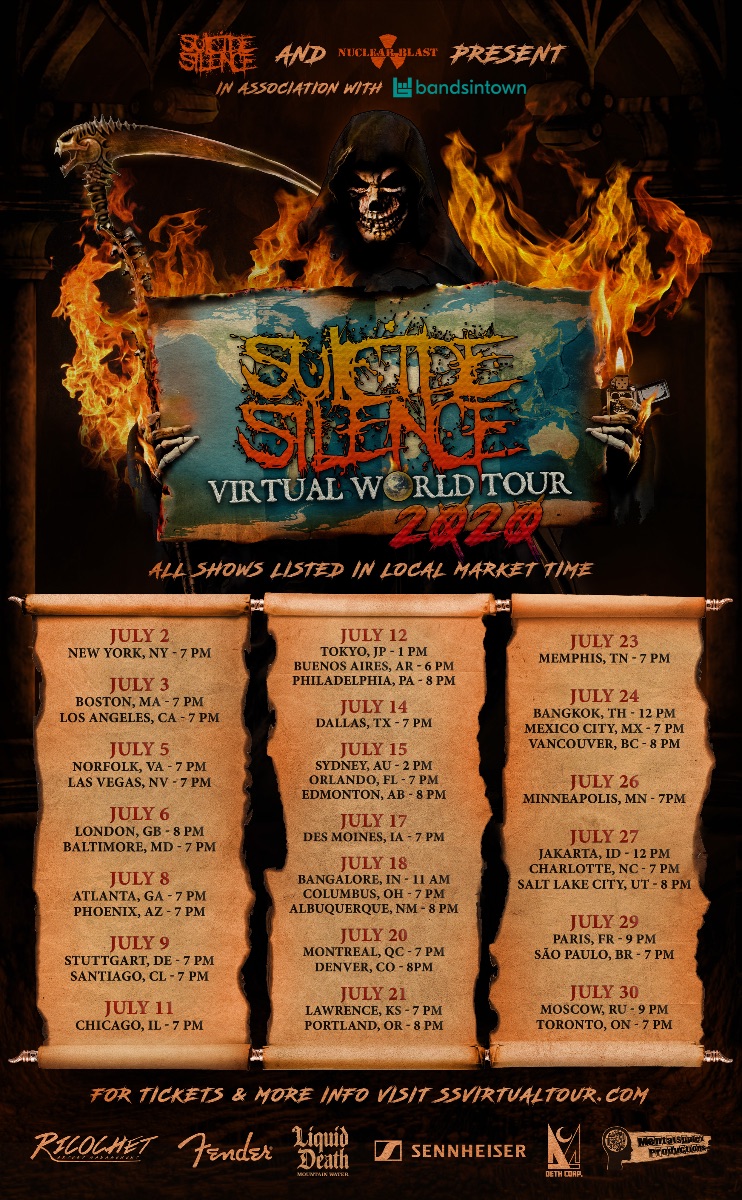