It only seems like yesterday I was sat in the same seat listening to, and writing about, Code Orange’s new album ‘Underneath’. It was released to critical acclaim early in March, and  rightly so. A genre defining album that has stood out from the pack so far this year.  However since its launch the landscape of the world has changed, live music seems something of a distant memory and the band have not been able to tour in support of the albums release.

So what next to fill the gap? A live stream event has already been done, and much like their album they pushed the envelope of what is possible in such a medium. The next step comes out in the form of a live album based off of the stripped down acoustic live stream. 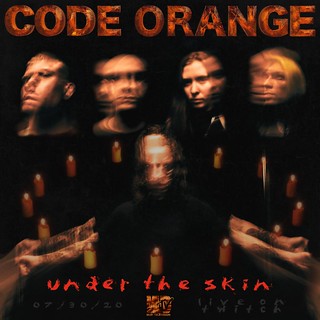 For anyone who has caught the band live in the past, you’ll be familiar with their persona; raw, gritty, aggressive music injected into a heady, manic, blistering live show. That persona this album is not! Instead the band have stripped back their music and perform a mainly acoustic set (similar to that of Nirvana’s infamous MTV Unplugged set). The songs interspersed with a unique twist, interludes fill the gaps between tunes, creating an almost cinematic narrative for the performance.

More grunge in feel than the bands traditional style of hectic hardcore, highlighted with a unique cover of Alice In Chains ‘Down In A Hole’. The offering really highlights Reba Meyers vocal capabilities, more so than any previous offering the band have given us. The recording as an entity shows just how versatile every member of this band is, switching the usual aggression off with the flick of a switch and turning to this melodic, almost poetic version of themselves and showcasing the depth of their recorded material.

For a long time I’ve considered my top ten albums of the year to be pretty much set in stone. With ‘Under The Skin’ Code Orange have blown that to pieces. Just when you had a band like Code Orange pigeon holed, they come up with a stunning piece of work that blows all misconceptions away. Fan of the band or not... you NEED to check this out!