Hell’s dark pope, Pinhead, stated that there is a secret song at the centre of the universe, and its sound is like razors through flesh. Well, I personally hope the spikey-one is correct, because if that song is anything like the unholy noise heard on Evaporated Sores’ album, Ulcerous Dimensions, then we are all royally fubar!

The band set their stall out in the first seconds of opening track, Claimed by Inertia; a slow, lumbering pace with bestial vocals sitting low in the mix, while a second, clearer but no less unnerving, is heard to spout demonic parables. Twisted guitars play off each other as the track begins to gain some momentum, as though trying in-vein to escape the thunderous low-end rumble.

Ulcerous Dimensions is American band, Evaporated Sores debut long-player and to try to encapsulate the genre of the album would be utter folly. The record is an amalgam of Death blast-beats; of slow, hulking sludge riffery; of tortured Black Metal atmospherics, all collected together and forced through a Noise perspective. 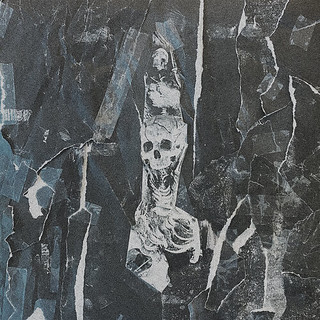 The Death Metal tropes are most prevalent on Regurgitation Existence, which utilises the blast-beat drum and a quicker paced tempo for the most part. However, there is no escaping the cloying nature of Ulcerous Dimension and the track descends through some very unnatural bridges into fuzzed feedback loops akin to a 70s Italian horror movie. Even the most ‘commercial’ track on the record, Rote Resurrection, uses unnerving shifts in musical tempo and timbre to create an uncomfortable listen.

When Ulcerous Dimensions really goes out of its way to mess with your head, it manages to effortlessly do so. Eternal Inflation, Infinite Remission and Cosmic Indifference are all fully loaded scare-fests. Evoking the mood and ambience of traditional Black Metal, when the genre was more concerned with developing an atmosphere rather than delivery musical ferocity, Evaporated Sores have channelled Blut Aus Nord’s MoRT and SunnO)))’s Black One to create music that oozes filth and depravity.

Eternal Inflation is a cacophony of sound, with all the instruments demanding to be heard, yet all speaking over the top of each other with no coherence whatsoever - a séance of sound, if you will. It is almost otherworldly jazz, with tortured guitars howling in fear and degradation. Cosmic Indifference’s lumbering sludge is interrupted by violent burst of speed, playing out like the fractured mind of some unknown protagonist.

The accomplishment of Evaporated Sores to create Ulcerous Dimensions as a debut is astounding. The levels of ugliness in the seven tracks make the album an abject lesson in musical darkness and depravity, one that suggests Lovecraft’s Elder Ones might be closer than we think.