Slayer! Slayyeeeerrrrr!! Scream it loud! But stop. This isn’t a Slayer review. Fear not dear reader, I haven’t turned into Carl Black and this isn’t another rambling consideration of an Igorrr reissue. Although Axel Rose is an anagram of oral sex. Sorry, I digress. Mindwars, for it is they who I am listening to as I write this, are a thrash band who are based in Turin, Italy and Los Angeles, USA. The reason for my opening excitement is that Mindwars worship at the high altar of the thrash gods themselves. Now, I’m not familiar with their first three albums, but their latest release is not so much a nod to Slayer as all out adoration. And yet, delightfully, there is more to ‘The Fourth Turning’ than just plagiarism.

In fact, I may have been doing the band a disservice because although there is no doubt that Slayer do feature heavily in their influences, there are additions to their music which ensure that this is a very listenable slab of thrash metal. Most interestingly is the vocal delivery of Mike Alvord who presents as a cross between Cronos, Tom Araya and Thomas Gabriel Fischer. Yes, the guttural growl of the Triptykon legend looms large on the opening song ‘The Awakening,’ ‘Fall In Line’ and ‘Mindwars’. 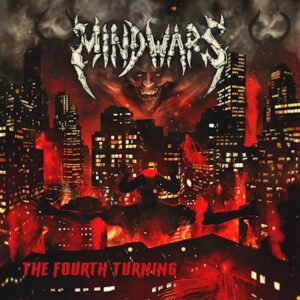 Mindwars don’t shy away from topical subjects. War, civil unrest, disease, and authoritarian governments all get the Mindwars treatment. An album that mirrors our times. ‘(Who’ll Stop) The Aryan Race’ has uncomfortable archive clips of Hitler in the background whilst ‘Digital Dictatorship’ incorporates sound bites from the orange chimp in the White House. One of my very minor criticisms of this album is the band’s over-reliance on additional sound effects and media clips which can detract from what is solid thrash metal. The power of ‘Black Death’ doesn’t need anything else, it stands proudly on its own without the need for any additional interference. Similarly, ‘Holy Terror’ relies on an evangelistic sound clip before exploding into life with some fine brutal thrash. But that’s a small point and it doesn’t detract from some fine playing, with breakneck solos screaming at you from all angles. Mindwars are certainly set at top speed for most of this record but they prove they can slow it down with the grinding ‘Marching Off To War’, a more controlled Anthrax style stomp.

There are many influences readily identifiable throughout this record, but Mindwars have a style that combines them all in such a way that they have created their own sound. A faithful cover of Slayer’s ‘Criminally Insane’ closes things off and although it’s far from the best thrash album of 2020, there is ample raw promise to ensure that Mindwars are now on the thrash radar.