Big, stomping industrial tinged gothic metal. If you like the sound of that, then I’d put a big Welsh pound on your delight at the latest album from German outfit Soulbound. There’s a huge energy that pulses through the 51 minutes and 13 tracks with almost no time to catch your breath.

Soulbound hail from Bielefield and comprise Johnny Stecker – vocals, Felix Klemisch – guitar, Johnny Ramirez – guitar, Patrick Winzler- synths, Jonas Langer – bass and Mario Krause – drums. Inevitably there is comparison with their countrymen Rammstein and there are certainly times when the two cross in sound, but there is also a mix of Rob Zombie, early Manson and Korn which provides them with a more melodic and darker sound. Stecker can certainly carry a note and provides a wide range of vocal styles as the album progresses. 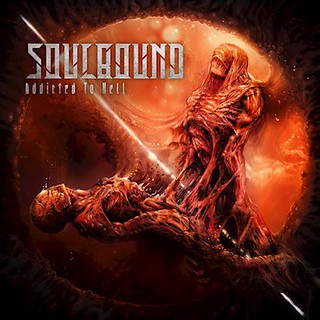 The industrial groove is never far away, with heavy driving riffs complimented by subtle synths which add layers and breadth to the tracks. No where is this more eagerly demonstrated than on ‘Toxic’, which blends all the band’s influences into one meaty, yet accessible track. If it all sounds a bit throwaway, then there are surprises throughout to reign you back in. The lyrics are dystopian and socially critical, with a sinister undertone.

Tracks such as ‘Fuck You’, ‘Devil’ and the pumping Eurovision feel of ‘Crash and Burn’ all demonstrate a diversity that is unexpected after the opening title track.

Created under the direction of Chris Harms (Lord of the Lost), ‘Addicted to Hell’ is indeed a compelling listen. At times light and melodic, at others crushingly heavy, the band maintain a darkness through the ballads and the aggressive, muscular songs with equal measure and no little power. Its music made in a sweaty, grimy factory. Ideal to work out to, lose your shit in a club of 50 people or in a gargantuan arena, Soulbound have crafted an album which will appeal to many and cut across the genre chasms