Corners of Sanctuary originate from Philadelphia and label themselves "New Wave of Traditional American Heavy Metal". Formed in 2011 and releasing their debut album 'Breakout' the following year. Since them they have been very prolific releasing a flurry of albums and E.P.'s, over the years.

Their new album 'Heroes Never Die' is due for release on new label RFL Records and with new singer Stacey Lee. 'We Never', the opening track, starts by laying down the gauntlet of intent with a blistering wedge of classic metal. Snare drum rolls and catchy guitar riffs abound, call and reply chorus' all fit nicely. Hints of classic bands like Manowar and Judas Priest come to mind. 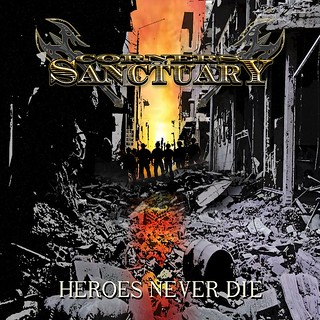 This is carried on throughout the album 'Someone Else’s War' and 'I Will' have a steady metal riff and great hooks, the steady pace and big sound will satisfy any metal head. Title track 'Heroes Never Die' sounds like a lost early Judas Priest b-side. The vocals are reminiscent of Saxons Biff Bifford in his hay day. They really come to there own in songs like 'Best of the Best' and 'Combat Shock', which sound like they have come from a classic metal album from the 80s. This is not a bad thing as they all have a warm, familiar feeling like you are listening to that lost Tysondog album. This band really hit their manifesto to bring back classic rock, I feel the sound has more British heavy metal sound than American, especially on stand out tracks 'We Are The Dead' and 'Fight The Good Fight' where the vocals take on a more decidedly Rob Halford feel.

Overall this album is a belter, I love this sound even if it is a well worn road. It's well worn for a reason, this is the sound that got many people of a certain age into metal. Things may have moved forwards in lots of ways since then, heavier, faster, darker, but there will always be a place for classic slabs of metal and this is a fantastic example of why metal is the best and most long lasting music on earth.