It’s nearly 30 years since Norwegian extreme metallers Enslaved first appeared in the metal world. Resolutely Bergen based, the band arrive at their 15th album with the anticipation amongst their devoted and widespread fan base as eager as ever. Few bands have such an understanding, accepting or loyal audience. The band has developed hugely in those 30 years, their travels seeing them move from the Viking metal labels of their early black metal days to one of the most recognised and admired progressive metal outfits around. So much so, that it’s almost impossible to put a label on the band whose longevity is mostly attributed to the driving force of childhood companions and founders Ivar Bjørnson (guitars) and vocalist Grutle Kjellson. Alongside them stands Arve “Ice Dale” Isdal on guitar, himself an 18-year veteran, sophomore Håkon Vinje on keyboards and clean vocals and new drummer, good friend, and former producer Iver Sandøy.

2017’s ‘E’ not only saw the band push their progressive boundaries once more but also saw the band tour extensively, before the departure of long-term drummer Cato Bekkevold. With Sandøy the ideal replacement, Enslaved began writing in late 2018 and the fruits of their labour are now revealed in one of the most anticipated and exhilarating albums of 2020.

The new album is a journey into and through scary ‘Utgard’. In Norse mythology this is a landscape where the giants dwell but here it can be countless things. An image, a metaphor, or an esoteric location. Psychologically it may represent the spheres of sleep, dreams or the borders of consciousness and the subconscious. As the band state, “It is not about avoiding fear of the pitch-black darkness, but to go into the darkness itself”. Utgard is hard to master, madness, creativity, humour, and chaos all dwell here. 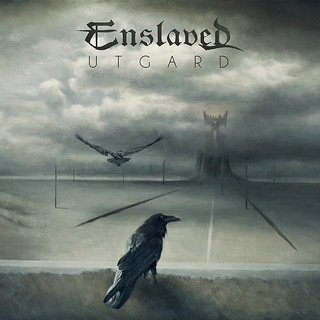 From the opening Nordic chanting on ‘Fires in the Dark’, this is an exceptionally detailed and crafted release. Atmospheric in emotion, ‘Fires in the Dark’ opens relatively calmly, although the hint of explosive tension is always present. It’s a massive opening song, building in stages, before a captivating riff hooks and rips hard. From this moment, the juxtaposed vocal delivery of Kjellson’s harsh roars and Vinje’s sonically clean style weave around the pulsing drive. It’s a magnificent and epic opener to the album.

The fire of Enslaved remains undiminished throughout. Indeed, the band may be more interlocked and on point than ever before. ‘Jettegrytta’ is a blasting torrent, the harmonies on the vocals adding melody amidst the controlled rage that encompasses the powerful expressions that are erupting at all sides. Utilising technology where necessary, such as on the swirling title piece, Enslaved retain an earthy organic quality to their music which is dominate without being overbearing. The thumping keyboards on ‘Urjotun’ change the pace, feel, and style, joined by rapid riffing and an industrial fusion, the pulsing beat joined by shimmering guitar work.

‘Utgard’ isn’t an easy, one time listen. But then this is Enslaved. Masters of the complex, the progressive and the extreme. The layers need time to unpeel, the music, like a fine wine, given time to breath. Immerse yourself in penultimate song ‘Storms of Utgard’ which flows between the extremities of their roots and the progressive meanderings of the likes of King Crimson and allow their music to infiltrate. Allowing Enslaved time to penetrate the levels is not just necessary but essential. There are the necessary contrasts, the variation between the thumping ‘Sequence’ and the flourishing album closer ‘Distant Seasons’ stunning. ‘Utgard’ provides the myriad of complexities. As elegantly crafted as the spider’s web, it holds the attention from start to finish. A weaving, sonically magical soundscape, 30 years later and the Norwegians remain the masters of their own destiny and an integral part of the progressive extreme music scene. In a time of crisis, music this good need to be savoured, protected, and supported.

Utgard is released by Nuclear Blast on 2nd October