So, who can name me an Italian metal band? Don’t all put your hands up at once! No, I must admit I was struggling as well, but I can now, Italy’s very own Netherblade, a group I don’t suppose many of us will have heard of before, but now this might change with the release of their first full length, the efficiently named: ‘Reborn’. The band; Danilo Sunna - drums, Simone Aiello and Davide Zacco - guitars, Andrea Ledda - vocals, Fabio Vanotti – bass (Luca Frisenna - gass on the album), have released a few singles and a five track EP previously, but having had a quick listen to those past works, I can honestly say that ‘Reborn’ is a massive leap forward in all aspects; sound, musicianship and song writing. The album is 10 songs, the first of which 'Overture' is a two-minute classical intro, with strings and what sounds like a church organ, classy stuff. This leads into the first track proper 'Eyes of the World', up-tempo with a great, driving, swirling riff, that leads into a heavy chord progression riff, and some tasteful leads accompany the catchy chorus. The title-track has a cool choppy riff, and a chorus designed for crowd participation. There’s plenty of other excellent thrashers on offer as well like 'Till the End' and the self-titled. 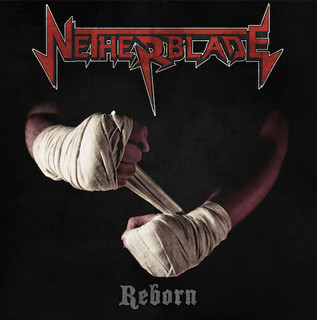 But what I really like about Netherblade, is that they aren’t afraid to take a few risks and make some unusual song writing choices. Take my favourite song, the wonderful 'From the Abyss' not only is it musically very strong, with a great catchy overall structure; the band use some simple strummed chords over a fast drum beat, and later add some vicious picking parts, but the best bit is that the chorus is quite unusual, but extremely catchy. Another oddity is 'Braindamage', it’s got a peculiar feel-good riff, almost like a Motley Crüe meets AC/DC type rock n’ roll thing, which sounds awful on paper, but strangely the band manage to pull it off nicely. The longest and most ambitious track is 'Killing Spree' which sees them using haunting keyboards and acoustic guitars to open, before the song itself, again, channels an almost rock n’ roll vibe, and another irregular chorus and vocal melodies, then later some great instrumental passages which almost have a Queen and Maiden like feel, with some great bass work and a stylish solo. Great stuff. 'Nothing is Real' ends the album on a heavier note, ramping up the speed when it needs to, then slowing to heavier, chunkier parts, there’s almost a bit of a Slayer-ish vibe to parts of it.

‘Reborn’ was a real surprise and an enjoyable listen, it took a few spins for it to sink in, as a lot of good music tends to, but after that there’s some great material to be heard, that will appeal to fans of Exodus, Slayer, Death Angel, and early Artillery. It's good to see a band try and be a bit adventurous and bold and add a different element to their sound to stand out. Whether this will be enough to gain the band a bigger following I’m not sure, although for me, it certainly deserves to garner them a wider audience. Great album.

Check back on Thursday for some exciting Netherblade news!!